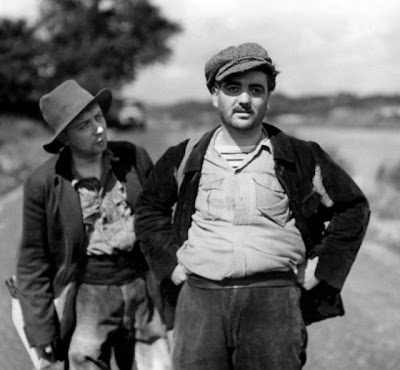 One thing you have to say about the 1001 Movies You Must See Before You Die list is that if you like French films, you’ve got much on this list to make you happy! And I mean a lot of French films! So in order to shave some time in going through this list, I think I'll do a couple of weeks of blogs on just French films. Of course, many of these films are on DVDs that have commentaries and I enjoy watching the commentaries and yadda yadda yadda...which takes even more time! It also takes a lot of time to write something or other about these films, so I am going to reduce any commentary on these films over this span to just a blurb for each film. Break it down to the essence, so to speak. Comprendre? I mean what do you say if someone asks you about a movie, anyway? Do you go into a long diatribe about how you think the donkey represented Christ in a Robert Bresson film? No. Usually you say, “It was good,” “It was bad,” “It was OK,” or maybe even if you are at a loss, say “At least Angelina Jolie has a nice butt.”

Hopefully, I can do a little more than “It was good,” or “it was bad.” But I’m sure I’ll use “Catherine Deneuve has a nice butt” at some point. That doesen’t make for the most academic commentary, but if that is the particular insight that sticks in my brain the most, I’ve got to go with it. “Jacques Tati is the Frenchman’s answer to Jerry Lewis!” or “This film brings home the horrors that are French pastries,” might be other examples. Enough delay. The clock is ticking. I’ve broken out my beret, have been listening to Maurice Chevalier's recording of "Mimi" from Love Me Tonight and have been saying Viva La France to my family more than they probably wanted to hear in preparation for this and am now ready to proceed.

Freedom for Us (1931) Directed by Rene Clair

Note: Well, the above was my first blurb. It's not always easy for me to break my impression down to one sentence. Though I do find if you translate what you say into French, it can probably give what you say an intellectual heft that your thoughts probably don't deserve.
Posted by 1001: A Film Odyssey is produced, directed and written by Chris, a librarian. at 8:03 AM