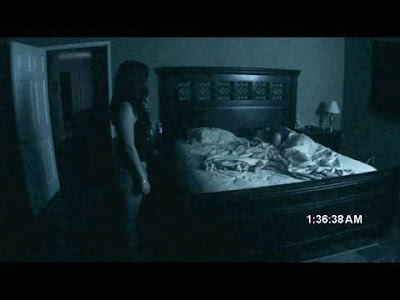 Seeing a film done completely with a handheld camera or on a tripod can give the viewer an intense point of view. I think this was used to great advantage in The Blair Witch Project and if the innovative monster movie Cloverfield hadn’t used the device, that film would have basically been Godzilla.

Paranormal Activity uses a similar device. The whole film is whatever we see from the camera of a man who is trying to record the increasing amount of supernatural activity running rampant around his girlfriend. It’s an interesting film, suspenseful and all that. It has some nice odes to The Exorcist and other horror films. I wouldn’t put it on a list of indispensable films as the latest update of the 1001 book has done, but it’s a pretty good addition to the horror genre. I won’t quibble too much about its inclusion.

The Day (Night) After Effect: I’m willing to give this film bonus points since I got up in the middle of the night after watching it and could have sworn some lights came on that I was sure I hadn’t turned on. Okay, the night after effect makes me give this film a more solid thumbs up and inclusion in my book. Would you ghosts please leave me in peace now?

Tomorrow: Horror films never seem to get Academy Awards. Well, there was at least one exception and I’ll view that for tomorrow with Fava beans and a nice chianti, though I've never really cared that much for liver.
Posted by 1001: A Film Odyssey is produced, directed and written by Chris, a librarian. at 8:01 AM