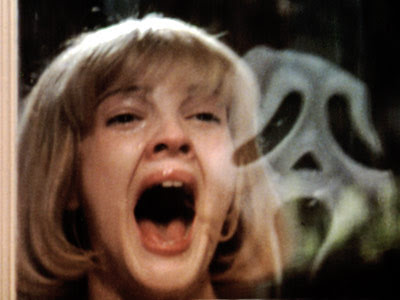 I know I’m about fifteen years late to the party on this one, but I don’t normally watch these type of horror films anymore. What struck me about my virginal viewing of Scream was that the entire life of most of these teens revolves around an existence populated by the obsession of the type of film in which they are a part of.

This films references some of the films from the preceding twenty years that I remember watching, most particularly Halloween. It’s also interesting that Craven mentions his own film Nightmare on Elm Street. “But the sequels sucked!” or so says Drew Barrymore. There’s even a cameo by Exorcist star Linda Blair! I’m not sure where the Henry Winkler fits in, though it might have been cool if he had been murdered by pyschos wearing Fonzie masks.

It’s also interesting that whenever lead character Neve Campbell tries to say in some way that this isn’t a movie, another character will quickly correct her and point out that yes she is in a movie, though Neve vocalizes her wish that her genre was a Meg Ryan romantic comedy.

For me, there’s a real shortage of sympathetic characters, except maybe Campbell, but I think maybe that’s the point. There’s enough plot twists and mayhem to keep fans of the genre happy and Mr. Craven definitely puts new twists in it.

My two favorite characters are David Arquette as the Barney Fife-like deputy and Jamie Kennedy as Randy, the nerdy kid, who understands the ins and outs of horror movies a little two well.

I don’t think I’ll be venturing further into the Scream movies, but I admit that this one had more than its share of good moments.

Day after affect: Didn’t feel any aftershocks as far as scares were concerned, but there were a couple of moments the next day that I thought, “Hey, that part was pretty clever.”

Tomorrow: I’ll find the most recent 1001 movie listing in the genre I can find.
Posted by 1001: A Film Odyssey is produced, directed and written by Chris, a librarian. at 8:00 AM