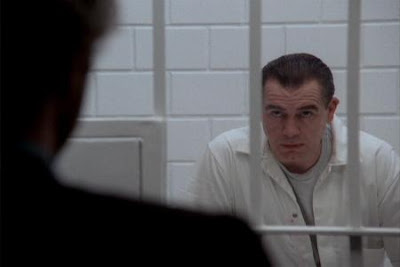 Manhunter vs. Silence of the Lambs

These two films are based on the novels Red Dragon and Silence of the Lambs by Thomas Harris. Both stories are about an FBI manhunt for a serial killer in which the main investigator enlists the aid of the infamous imprisoned serial killer Hannibal Lecter.

The characters
Will Graham (Manhunter) vs. Clarice Starling (Silence of the Lambs)
That’s a tough one. Will Graham’s FBI man must get into the head of Dr. Lecter in order for him to get the scent or the feel of the serial killer he is chasing. Clarice Starling also wants to get into Dr. Lecter’s head, but more for information on the bad's guys whereabouts than anything else.
I identify with the Will Graham character a little more than Clarice and William Petersen does well in the part, but Jodie Foster is so damn good in Silence of the Lambs I have to give this a slight nod to those lambs that won’t stop sceaming..

The Tooth Fairy (Manhunter) vs. Buffalo Bill (Silence of the Lambs)
Let’s see: The Tooth Fairy and Buffalo Bill both (as Dr. Lecter points out in Silence of the Lambs) covet. Buffalo Bill covets what he sees everyday and starves large women to easily remove their loose skin. He puts a moth in the mouth of one of his victims to experience the metamorphosis. Dolarhyde “The Tooth Fairy” of Manhunter uses sharp fake teeth to bite his victims and is obsessed with The Great Red Dragon painting by William Blake. He covets the familes he watches repeatedly in the home movies he views at his job. Overall, I think Buffalo Bill is a little more complex, but Dolarhyde did have the more tender moment in Manhunter after he weeps after making love to a blind woman. Still, those pesky moths give this round to Silence of the Lambs.

Hannibal vs. Hannibal
But really, it’s all about Hannibal the cannibal, the psychotic psychiatrist who routinely eats his patients and others but is even scarier in that he is more intelligent and well spoken than those who study or try to understand him. Brian Cox is a very good actor (I think of the screenwriter McKee in Adaptation whenever I see him) and he portrays the intelligent Lecter as very threatening. There is no way I would ever want this guy to pshycoanlayze me- He’s too damn creepy!

Anthony Hopkins’s Lechter may be even more scary because if you didn’t know that he ate people’s faces you could definitely get sucked in by this guy and never know what hit you as you innocently begin to blurt out your most intimate thoughts from his couch. Hopkins as Lecter may be ingrained in me as part of pop culture at this point, but no one is twisting my arm as I go with Hopkins and Silence of the Lambs.

Best Dramatic scene
Manhunter’s gotcha scene has Will Graham hurtling himself through a glass door to try to save the damsel in distress from the evil Dolarhyde. Wait for the SWAT team Will! All hell breaks lose and it’s the scene we the audience have been waiting for.

Silence of the Lamb’s big scene to me is when Hannibal Lecter engineers his escape through…uh…disguising himself behind the ripped off face of one of his victims. Ugh! The scene where the SWAT team comes in to discover the murdered police officers may be the film’s signature moment.
I’ll have to go with Silence of the Lambs once again.

Well is there anything that Manhunter can win here? Well, yes. I think the overall story is a little better in Manhunter mostly because of the nicely paced look at Will getting that 'serial killer scent' back to successfully track his prey. It gets some additional bonus points for the fast tempo music, the fact that it is better than the Red Dragon remake with Ralph Fiennes, and that part of it was filmed outside of Georgia State University while I was going to school there.

Silence of the Lambs get bonus points for having a bit part for B-movie directing legend Roger Corman, Dawn of the Dead directing legend George Romero and featured the only screen credit for "Darla" who so winningly portrayed Buffalo Bill's dog "Precious."

I expected Silence of the Lambs to be on the 1001 list, but I am surprised and glad that Manhunter is there too.

Day after effect: Did make me want to go back and read the Thomas Harris books.

Tomorrow: There must be some movie on this list with a Halloween theme. Let me think on it a minute. 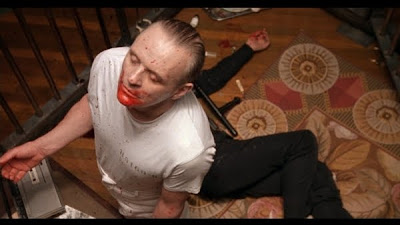 Posted by 1001: A Film Odyssey is produced, directed and written by Chris, a librarian. at 8:01 AM