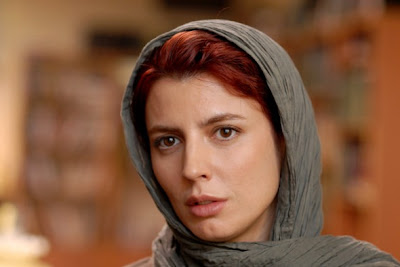 I mentioned in my last post some of the criteria our library uses for choosing films to show during our foreign film festival. This Iranian film doesn’t meet one of the criteria in that it’s pretty grim and isn’t exactly uplifting. However, I’m willing to overlook that fact for this one for a couple of reasons. This film had such a positive critical response (and a Best Foreign Language Film Oscar to boot) that I have no problems in going with this one for the library to show.

Before I started going through some of the Iranian films on the 1001 list (Gabbeh, Close-Up, The White Balloon) and a couple that aren’t on the list (Offsides! and Song of the Sparrow), I had no idea that Iranian cinema was so respected. As I've looked at a few of these films, I take note of the many similarities between Iranian culture and American culture, yet societal constraints, particularly the treatment of women, are vastly different. What is the proper role of women in this society? What are the limits to what they can do or can’t do? How has the influence of Western culture changed the ways women are viewed in this environment?

I don’t have definitive answers to these question, but please feel free to talk amongst yourselves.