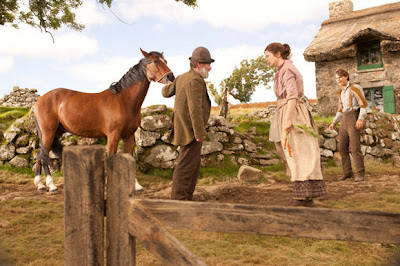 When I put in the DVD for the movie War Horse,I accidentally pushed the button for English Audio Descriptive on the remote. As the movie started, a female voice, with a pleasant English accent began narrating over the first shot of the movie...

A slow moving aerial view of the sun rising over an undulating gray landscape. Fields boardered by bushy hedges stretch out into the distance. The sun spreads its light over the land-a silvery lake reflects the rays. Sheeps graze contentedly. Tucked between the pastures, a tall rectangular church steeple looms up above the cluster of small, gray stone houses. White chalk litter the Devonshire landscape, below them a stream meanders to the coast. In a meadow, three men wearing rustic clothing are tending to a dark brown mare who is laying in the grass. A brown-haired teenage boy with blue eyes is peering through a wooden fence as the three men coax the mare.

Keep in mind this narration is not part of the actual movie, though I do think it describes the event taking place pretty well. I decide to watch the entire thing with English Audio Descriptive on. I come to like our narrator as the movie progresses and look forward to her describing the events as we proceed through parts of the story with limited dialogue.

During the emotional final scene, (English Audio Descriptive spoiler alert!) our narrator (who I am now referring to as Clara) paints the canvas of the unspoken scene with words...

Albert shakes his father’s hand…and then hugs him. Rose then steps toward them and places her hand on Albert’s back. A family tableau beneath the fluffy, brown clouds and orange sky. Standing by the gate, Joey watches the family as Ted and Rose stroke Albert’s face. Against the dramatic sky, Joey’s chestnut coat gleams like beaten copper. His calm brown eyes gaze toward the sunset. His long, sleek head stands in profile.