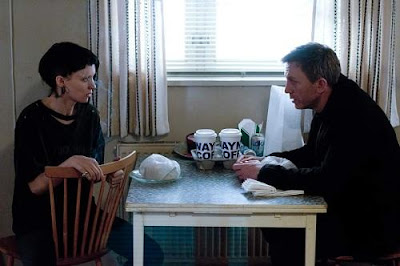 The Girl With the Dragon Tattoo

I read (technically listened to the Audiobook versions) all three of Steig Larrsen’s Girl With the Dragon Tattoo series. I’ve also watched and liked the three Swedish movie versions from the series. However, when it was announced that David Fincher was doing an English language version, I wasn’t overly excited. Nothing against Mr. Fincher, but I was frankly burned out on the story.

Then the updated 1001 list appears and this version of Tattoo shows up on the list. So I grudgingly give it a shot, but I do so with a decidedly grumpy attitude. It takes me awhile to get involved this version, but I eventually do. I do like the way that Fincher shows the alternating stories of reporter Mykal Blumkwist (Daniel Craig) and Elisabeth Salander (Rooney Mara) He also does monkey around a bit with some of the plot revelations (one in particular), which does give those familiar with the original story some surprises.

Rooney or Noomi?: I didn’t like Rooney Mara as much as Noomi Rapace from the Swedish versions. Rooney is okay, but Noomi really became Salander for me.

Casting choice to make you feel old: The part of the sexy, but decidedly older Editor of Millenium is played by the always seemingly youthful Robin Wright of The Princess Bride.
Posted by 1001: A Film Odyssey is produced, directed and written by Chris, a librarian. at 11:25 AM