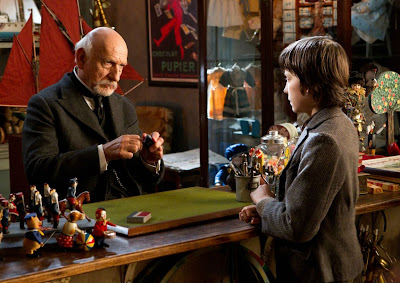 If you watch a lot of DVD extras on the films on the 1001 movie list, you will receive many visits from Martin Scorcese. I honestly think the man has seen every movie ever made! It gets to the point where whenever I watch anything, one of the first questions that pops into my head is, “I wonder what Marting Scorcese thought about this?” It’s like Martin isn’t any longer the director of Goodfellas or Mean Streets. He’s just my thick eyebrowed buddy Marty and he’s gonna give me his opinion. Thanks, Marty.

Of course, Scorcese is also one of the most respected directors in American film history. He has done a variety of films, though I associate him most with the gritty urban character studies like Raging Bull and Taxi Driver.

That is why I was a little surprised to see the trailer for Hugo. Hugo is based on a children’s book and is a 3-D family adventure directed by…Martin Scorcese? Are they sure they didn’t mean Steven Spielberg?

Part of the film has the young protagonist trying to find his way to get his notebook back from the grumpy toy seller at the train station where the boy lives. As we quickly discover that the man is actually forgotten French movie pioneer George Melies, it suddenly makes sense as to why my buddy Marty was attracted to the material (Other than the fact that he wanted to make a film his twelve-year-old could see.) Not to over psychoanalyze it, but I’m sure he could relate to a boy discovering not only the wonder and escape of old films, but resurrecting and bringing back to the surface an old filmmaker that he loved.

But I’ll check my friend Marty’s commentary on the extras to make sure I’m right.