BUTCH CASSIDY AND THE SUNDANCE KID (1969) 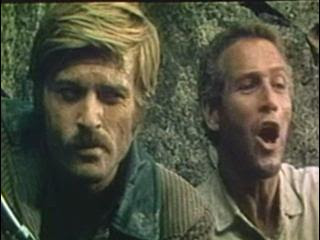 "Who are those guys?"

"Boy, I got vision, and the rest of the world wears bifocals."

"He'll feel a lot better after he's robbed a couple of banks."
Lines from William Goldman's script from Butch Cassidy and the Sundance Kid


After I watched this film for the first time in years, I listened to the commentary track by the outspoken screenwriter, William Goldman. It was almost as entertaining as the movie. You can give credit for this movie's success to the stars, the directors or whoever, but it ultimately comes back to Golman's script (punctuated by his years of research on the subject) that truly carries the day here.

"You just keep thinkin', Butch. That's what you're good at."

"You should have let yourself get killed a long time ago when you had the chance. See, you may be the biggest thing that ever hit this area, but you're still two-bit outlaws. I never met a soul more affable than you, Butch, or faster than the Kid, but you're still nothing but two-bit outlaws on the dodge. It's over, don't you get that? Your times is over and you're gonna die bloody, and all you can do is choose where."