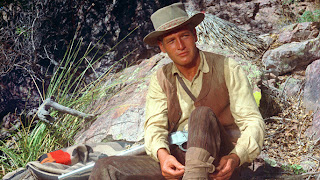 Long before Little Big Man or Dances With Wolves, Hombre depcited a white man who was raised by Indians and took to their ways over the ways of the white man. It's interesting to note that Newman's stoic performance in Hombre is completely the opposite of his later personable Butch Cassidy character, but equally effective.

It's also interesting that the film's villain isn't really the gunman played by Richard Boone seeking to rob the stagecoach. The real bad guy is the intellectual financier played by Frederic March who swindled the Apaches with a pen, not a gun.

The supporting cast also includes Martin Balsam, who was also in Little Big Man. No reason was given why Kevin Costner didn't want to cast him in Dances With Wolves to complete the trilogy.

Posted by 1001: A Film Odyssey is produced, directed and written by Chris, a librarian. at 8:22 PM