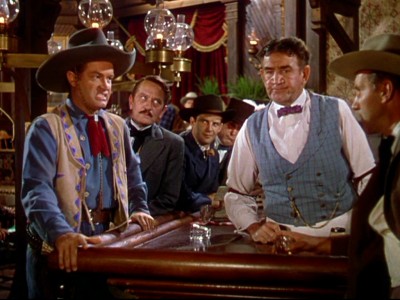 If you grew up during the 70's, it was hard to miss Bob Hope if you ever turned on your television at all. And the seasonal Bob Hope specials seemed like a big deal at the time. Bob would always goof around with famous old friends like Jimmy Stewart or Gregory Peck or Jackie Gleason. He'd also make inappropriate inneundos to Charro (Wow! I haven't thought about Charro in years! Thanks for the memories, Bob!).

I always liked Bob introducing the all-American football team while making quips. Then there was the Bob Hope Desert classic golf tournament and the Texaco commercials. And let's not forget his unscheduled "walk-ons," on seemingly every talk show of the era which he would do at anytime to anyone. I guess nobody ever told him that that was kind of rude. All of it seemed pretty funny to a little kid.

The best thing about Bob Hope during the 80's was the SCTV bits with Dave Thomas as Bob Hope and Rick Moranis as Woody Allen where they just didn't quite seem to get each other. (Note to self: Go back and watch some old SCTV shows when the opportunity presents itself.)

The real Bob Hope didn't fare as well during the 1980's. Granted, he was in his 80's then, but his timing just wasn't there anyomore and the endless guest appearances by Brooke Shields made me long for the days of Charro. But, a legend he still was. But there was a day, a day long ago, even before there was television where Bob Hope was a pretty good movie comedian with great comic timing.

The one 1001 movie listing for Bob Hope is the comedy Western The Paleface, which also offers the beautiful Jane Russell and includes the famous song Buttons and Bows (One of my mother's favorite songs). But the chief draw of The Paleface is Hope. There are some good routines here(and some pretty good comic writing). I liked when Bob the dentist is working on a patient while peeking over his shoulder at a textbook as he goes along. I probably wouldn't label The Paleface a classic, but it was good to see the "old Bob" again when he was still in his comedic prime.

A Bob Hope movie should be on the 1001 list, though I'm not sure I would have chosen this one. It's not bad, as I said, but I might have gone for one of the Hope/Crosby road movies. I guess the book couldn't just say "Pick a Bob Hope movie of your choosing, any will do as long as its not one with Phyllis Diller!"