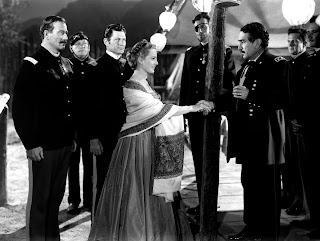 One of the more interesting aspects of the last of the John Ford/John Wayne cavalry triology is that it shows how military life effects the family. You pretty much know in the first scene when Lt. Yorke (John Wayne) mentions that he hasn't seen his son in fifteen years, it's only a matter of time before the son shows up under Yorke's command. We also see Yorke's wife (Maureen O'Hara), whose conficting emotion about the father and need to protect the son are two of the moves focal points.

Speaking of Family Issues: Isn't it funny how Indians, even in many of the classic Westerns (like Rio Grande, Winchester '73, Ride Lonesome as well as Rio Grande) never seem to have families that are shown? I'm guessing this is because the audience might identify with them or start to think that maybe the cavalry shooting their firesticks at them might not be such a nice idea. This idea did catch on in later revisitations of the genre, but not in Rio Grande. We do see the cavalry coming to a truce with Mexicans, but that's only to conspire together against the Apaches.

Posted by 1001: A Film Odyssey is produced, directed and written by Chris, a librarian. at 8:36 PM