The Great American Western (Post 1 of 12)
Stagecoach vs. The Searchers 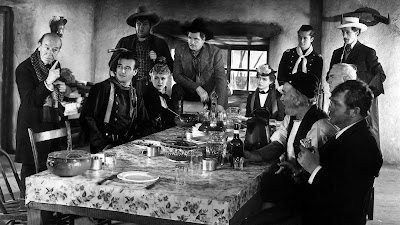 Ten years later, AFI put out another list and Stagecoach was nowhere to be seen. The Searchers, on the other hand had moved all the way up to number 12!

So why has the reputation of Stagecoach gone down and The Searchers stock risen so highly?

Stagecoach has the reputation as being the beginning of a more advanced storytelling in Westerns and by all accounts this seems to be true. So why is it not on the list? I'm guessing it may just seem a little too old fashioned now. The battle between the Apaches and the members of the stagecoach doesn't seem to date too well. Also, the cavalry coming to the rescue is now a cliche. It really doesn't matter that it wasn't a cliche at the time. Our modern sensibilities may also react a bit negatively to portraying the Apaches or any Indians without any depth (or families).

Where Stagecoach really gels is in the ensemble cast headed by John Wayne as the Ringo Kid and Claire Trevor as Dallas, the hooker with the heart of gold. We truly get a feel for all of the characters (the southern gambler, the drunken doctor, the mild-mannered whiskey drummer, etc.) and this character develpment really sets it apart.

The Searchers reminds me a little of Saving Private Ryan out West (Saving Natalie Wood?). This film does feel like a more modern Western, so maybe that's one of the reasons that the reputation of The Searchers is on the rise. John Wayne is clearly the star of this one and he is as tough and unrelenting as they get. He even has his own memorable signature line (That'll be the day!).

The Indians (The Commanches) in The Seachers are better drawn out than in Stagecoach. We see they have motivations (and even families!) of their own!

John Ford's Monument Valley does look quite wonderful in color and I certainly wouldn't argue with The Searchers being on the 1001 movie list.

But my vote between the two would still be for Stagecoach, though apparently I'm in the minority now. 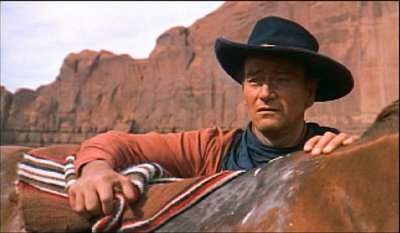