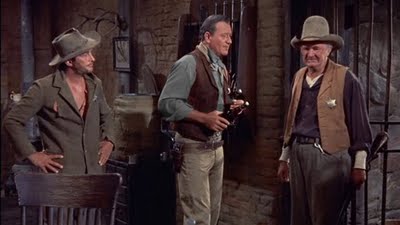 I saw an interview with Quentin Tarantino where he rated Howard Hawks'Rio Bravo as one of his three favorite movies (Along with Blow-Out and Taxi Driver). This persuaded me decide to go ahead and give it a look since I'd never seen it.

The plot is basically local sheriff (John Wayne) and his often drunk deputy (Dean Martin) try to thwart a villain (the bad guy who is always out of town but coming in soon to settle some old scores) with the help of the limping sidekick (Walter Brennan, of course) and a teen heartthrob (Ricky Nelson).

What's interesting is that although the plot is not epic in nature, the movie clocks in at a healthy two hours and twenty-one minutes. That's twice the time of many Westerns of the time (Ride Lonesome for example). It does have action, especially towards the end, but what is really has a lot of and what makes the movie stand out is the character development. The writing (Jules Fuhrman and Leigh Brackett) has to be good to hold the viewers interest for that long and the small but well-cast ensemble work well together. I'm guessing the dialogue might be one of the main reasons that it is on Tarantino's "best of" list.

We even get a song or two from Martin & Nelson accompanied by the harmonica stylings of Mr. Brennan. Thankfully, John Wayne doesn't join in the chorus.

Oh, I almost forgot. Angie Dickinson is Wayne's (much younger) love interest. Her presence adds further depth to the story and she looks great in her undergarments.

Note to self: Watch De Palma's Blow-Up and to Dressed to Kill real soon. 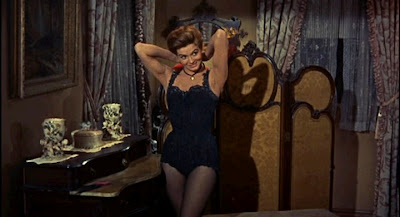 Posted by 1001: A Film Odyssey is produced, directed and written by Chris, a librarian. at 4:14 PM