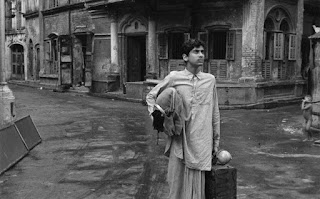 
(Aparjito) develops a sort of hypnotism for the serene and tolerant viewer who is willing to sit still for an hour and forty-eight minutes and let some stunning black-and-white pictures pass before his eyes.
Bosley Crowther, New York Times, April 29, 1959.

(On The World of Apu) Mr. Ray pursues the story and constructs the film with an attention to the finer spiritual values that is extraordinarily sensitive and rare...Life is an everlasting poem in the canon observed by Mr. Ray. It is a slow flow of sensuous experience surrounded by aesthetic qualities.Bosley Crowther, New York Times, October 5, 1960

Despite the fact that Ray didn't initially plan to make more Apu films after the first one, the three films that we have that constitute the trilogy flow together as naturally as any other film trilogy I can think of.

Apu's life in these films is full of hope and ambition, but harsh truths and tragedy always seem to be around the corner. Yet the films never seem maudlin to me...they just seem real. I felt I was in the village...school...marital house with Apu and with the other characters in these films.

I did go back and watch Pather Panchali again after I watched these the last two films and it was even better seeing it a second time.

All three films are highly recommended...but watch when you can be fully attentive to it. Repeat if necessary. 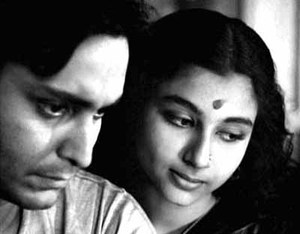 Apu with his new wife in The World of Apu
Posted by 1001: A Film Odyssey is produced, directed and written by Chris, a librarian. at 7:52 AM