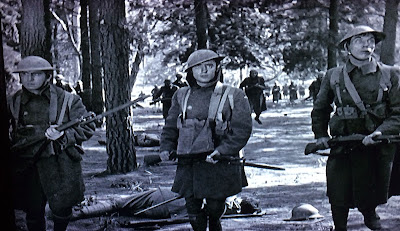 
New York Times critic Mordaunt Hall called The Big Parade the Best Movie "without doubt" of 1925 in his end of the year review from that year. The story features three American men who go off to fight in the first World War. They are spoiled rich kid Jim (John Gilbert) and working stiffs Bull (Tom O'Brien) and Sam (Karl Dane). Despite the differences in class of the three men, they bond and we see them train together, fight together and (in some cases) die together. The movie was directed by Kind Vidor, who gives much of the credit for the film's success to screenwriter Laurence Stallings.

The film has been cited in some sources (501 Movie Directors) as the most financially successful film of the silent era. I heard another source say it was second to Birth of a Nation, but either way The Big Parade was extremely popular.

So it was a popular film and a critical hit. The one thing that stopped it from being seen more over the years was, of course, that it was a silent and once talkies came around...well more people raved about All
Quiet on the Western Front just five years later...where you can hear the bombs...

King Vidor did make his mark in talkies as well, directing prominent pictures for over thirty years after The Big Parade. Leading man John Gilbert wasn't so lucky when the sound era came around. His star waned and he died of a heart attack in 1936.

But the reputation of The Big Parade stands. Most critics hail it as a masterpiece...though curmudgeonly critic David Thompson says The Big Parade is''often slack and clumsy." You can't please everyone, I guess.
Posted by 1001: A Film Odyssey is produced, directed and written by Chris, a librarian. at 12:00 AM