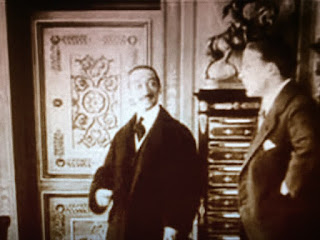 Mazamette and Phillippe! The heroes of Les Vampires!

If I had watched the 1001 Movies You Must See Before You Die in order, I would have watched the 1915 seven hour French serial Les Vampires in 2009!

By the way, it isn't about vampires like the bloodsuckers we are use to, but a group of criminals chased by the intrepid reporter, Phillipe. Let's get on with it already.

Episode 1-The Severed Head
Phillipe is a reporter who is on the case of a group of criminal hooligans called vampires. He goes to investigate at a rich person's house and finds a strange clue in a painting .The vampires strike again! A decapitation (the bastards)! The vampire perpetrator crawls down the wall. He leaves a note warning not to try to find him! But they have to try because there are nine episodes to go!

Episode 2-The Ring That Kills
Mazamatte from the first episode turns out to be one of the vampires…wait! He’s working undercover with Phillippe! We see Phillippe getting kidnapped after a wild vampire performance onstage that ended with the performer known as Irma Vep passing out. We see the vampire’s lair and hear of the Grand Inquisitor vampire! Phillipe is tied up, but thanks to Mazamette, it is The Grand Inquisitor who is tied up and killed accidentally by his own troops! The cops come back and the vampires are now on the run.

Episode 3-The Red Codebook
Philippe gets the vampire’s red code book from the Grand Inquisitor. That’s good. But vampire master of disguise Irma Vep has become a maid in in Philippe’s own house but Irma and the vamps are unable to get it back. Phillipe’s mother gets kidnapped (There are a lot of kidnappings in Les Vampires) only to have her abductor killed by a poison pen and mom escapes.


Episode 4-The Spectre
A film fanatic and investor (I guess) named Metadier and his 30,000 Francs are killed by the vampires impersonating office workers. How many factions of vampires are there? The Moreno gang shows up and appear to be rivals to the vampires. Is there no escape this evil? 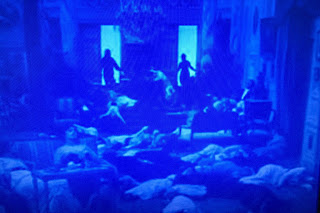 The vampires invade a party of the rich with a sneak
gas attack...maybe they aren't all bad after all.

Episode 5-Dead Man's Escape
One of the vampires is caught! Kills himself with cyanide… alas. But he’s not dead! He takes a prison guard from behind and escapes! The Vampires capture Philippe with a giant pole while he’s hanging over a balcony! (Not the only time this happens) He is put in a basket…but quickly escapes… and is back on the vampire’s trail! Whew! We are at a party of aristocrats where they are gassed by the vampires! They steal the jewels, but double agent Moreno steals them from them. Mazamatte rolls his eyes and get some laughs. 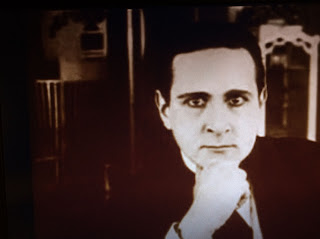 Episode 6-Hypnotic Eyes
Strange flashback with bullfight that… I didn’t get why there was a bullfight flashback. We learn that Moreno is a guy with hypnotic eyes.? Irma Vep is kidnapped by Moreno who falls for her and uses his hypnotism on her. She kills one of her colleagues while she is under his spell…The latest Grand Inquisitor vampire dies (They keep dying)!

Episode 7-Satanas
Moreno and Irma Vep make up with new Grand leader Satanas and plan an elaborate scam where a millionaire signs over 100,000 to other vampire accomplice. Luckily, the ever present Mazamatte witnesses the transaction and schemes to capture Irma Vep and Moreno which he does by the end of the episode.

Episode 8-The Thunder Master
A lot happens here. Moreno is executed. Irma Vep is sent to live in a leper colony or something. There is a scene where Irma Vep’s ship to the colony blows up (a pretty cool scene) and she makes a miraculous escape! She is nursed back to health by good people. Satanas does his a five minute paralyzing thing (something he did to Moreno earlier) to Phillipe before he sets a device to blow Phillipe’s house up. Mazamatte gets wind of the plan (again) and tosses the hat where the bomb is hidden out the window. Mazamatte and his juvenile delinquent son (don’t ask) capture vampire head Satanas! Irma Vep returns to the vampires and now the chemist Venomous is in charge! Satanas poisons himself in his cell.  (Another inquisitor bites the dust!)

Episode 9-The Poisoner
Phillipe and his fiancée (Jane) have an engagement party which (of course) is infiltrated by the vampires who try to poison the champagne! But they are found out and fail for the most part..but concierge Leon Charlet is a casualty of the poison. Mazamette and Phillipe eventually catch the elusive Irma Vet (again) but she escapes (again). Mazamette has an altercation with police but eventually all is worked out…except there is only one episode left to capture the vampires once and for all!


Episode 10-The Terrible Wedding
Months later. Phillipe and Jane are married. A wicked madame hypnotizes the widow of concierge Leon Charlet (Augusta) with yet another plan to capture Phillipe. Mazamette falls for Augusta (too soon, Mazamette?) The vampires capture Phillipe’s wife with the old rope around the neck trick again. However, Phillipe and Mazamette are able to follow the vampires because their car leaks oil which leads them to their hideout. Not that they are hiding…They are having a crazy wedding party for Venomous and Irma Vep! The police come in and capture or kill most of the vampires. Irma Vep is the last casualty and  Phillipe is reunited with his wife. Augusta (who is also captured) agrees to marry Mazamette and the vampire case is closed.


Watching this one-hundred-year old serial on a laptap one episode after the other is not the way this is meant to seen, but I'm guessing this was pretty exciting stuff for film goer seeing each segment and waiting with baited breath for the next episode to show at their local theater.

The two standout characters are Marcel Levesque as the resourceful but comical Mazamette and Musidora as the deadly femme fatale Irma Vep. Both of these actors return for director Louis Feuillade in Judex (1916). More about that one next time.

Bosley Crowther’s review of the film from the New York Times of a theatrical showing of Les Vampires in 1965 is pretty funny. Crowther calls it “A Spartan test endurance for even the most ardent movie buff…this French opposite number to The Perils of Pauline is the ultimate in cinema camp. It is a lurid,  slow moving, grotesque stretch out of fantastic adventures…How many viewers stuck to the end I cannot say.”

Posted by 1001: A Film Odyssey is produced, directed and written by Chris, a librarian. at 6:08 AM