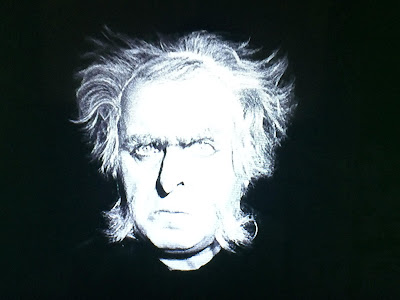 Mabuse in disguise
in Dr. Mabuse, The Gambler

I feel lucky that when I was growing up there were many opportunities to see silent features and shorts on television. It was clearly the silent comedies I gravitated too because many of the great gags by the comedy masters were timeless and actually enhanced by having no dialogue to get in the way.

Silent dramas were a different matter. I thought (and sometimes still think, honestly) viewing a more serious film without the aid of the verbal cues we are use to isn't always easy to do. Dr. Mabuse, The Gambler is a good example. The plot is a lot to keep up with. We have Dr. Mabuse, the criminal mastermind and master of disguise and all his henchman and all the people he dupes and we have law enforcement trying to put the pieces of the puzzle of his many crimes together and it requires a lot of concentration (at least it did for me) to keep it all straight. The movie is also well over four hours long, depending on what version you happen to watch.

But I hung with it and the plot, even though I wasn't catching as much as I would have liked in the beginning, about an hour in to Mabuse the style and the visual language of the story eventually began to click with me and I enjoyed the second half of the film very much. I'd even go as far to say that I found the overall viewing experience of Mabuse quite rewarding, as director Fritz Lang was clearly a master of the medium even at that early stage of his career.

Rudolf Klein-Rogge: Klein-Rogge (Dr. Mabuse) played important parts in several Lang films, including: Metropolis, Spies, and The Testament of Dr. Mabuse. His first screen credit is in the classic Cabinet of Dr. Caligari as "Man with the Knife." 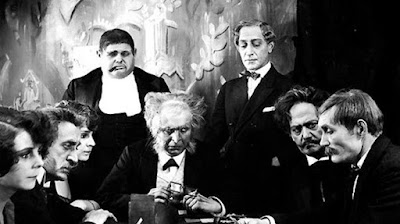 Dr. Mabuse deals while surrounded by a couple of his henchmen
in Dr. Mabuse, The Gambler
Posted by 1001: A Film Odyssey is produced, directed and written by Chris, a librarian. at 3:44 AM