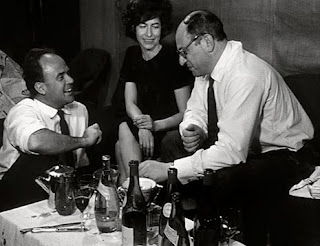 A film that carefully  uncovers the layers of fiction in real life.-Richard Thomson, A Biographical Dictionary of Film

If this pioneer work does not have story form in the usual sense, it does, nevertheless, stir the mind and occasionally the heart.-A. H. Weiler, The New York Times, May 7, 1965

When I first heard of the film Chronicle of the Summer, I had visions of surf and sand at the French Rivera and...that isn't what this was at all. What is was was something that was new at the time but is something we are all used to now...real people being themselves in front of the camera. But what we see here is often not very pleasant to look at. Our novice interviewer asks people if they are happy and the answer for the most part is some variation of "not very." The working class have to struggle and bend the law just to make ends meet, the black student isn't very well understood by his white companions and a former prisoner of a concentration camp has to deal with young people who can't relate much to that experience either. We also deal with students about to be drafted for the French War with Algeria, for better or for worse. (Mostly worse).

Rouch is credited as being the father of Cinema verite, defined by Roche as "not pure truth, but the particular truth of the recorded images and sounds-a filmic truth. This does not mean the cinema of truth, but the truth of cinema."

One difference that is stark here to what might pass for attempts to do this today is the honesty. Most of the people interviewed here are not happy, but they are very matter of fact about it and not prone to overwrought drama. The interviews are raw, unpolished, matter of fact and you never feel like anyone is saying anything they don't feel is the truth.

I also like the film as a document of time and of place of 1960 Paris. 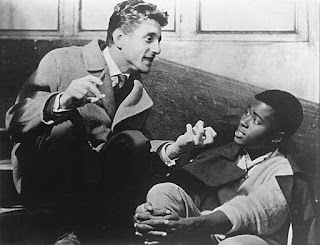 Intense discussion with an African student
in Chronicle of a Summer 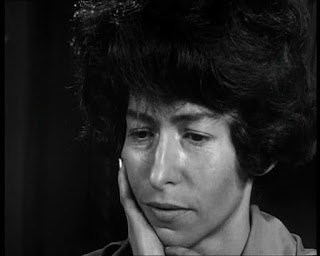 Holocaust survivor Marceline
in Chronicle of a Summer
Posted by 1001: A Film Odyssey is produced, directed and written by Chris, a librarian. at 9:25 AM