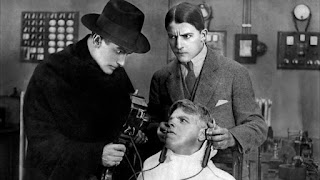 I have to make a confession here, I was planning to watch Louis Feuillade's 1915 French serial Les Vampires that I saw was available on YouTube. I knew if didn't involve blood sucking vampires, but criminals of some kind. Other than that, I didn't know much about it going in. Okay...I watched the first episode and then the second. I began to think to myself that I didn't think this was Les Vampires. A clue may have been the title card which read Judex before the episodes began!

So what to do now? Should I give this up and try to find another copy of Les Vampires (I eventually found Les Vampires on Archives.org) or keep watching Judex? I had to admit the copy of Judex on YouTube(a TCM restoration) looked nicely clear and the musical score was very good. So I kept watching.  The plot involves a heroic character named Judex (often compared to The Shadow) who benevolently watches over certain people and tries to get the goods on a corrupt banker named Favraux. The plot has a lot of twists and turns (as you would hope in a serial), and an awful lot of kidnappings, lots of familial drama and lots of good guys and bad guys and reformed bad guys...

On the whole, it's a more pleasant watch than the more famous Les Vampires, though both are pretty long, so make sure to pack a lunch before viewing.

Feuillade's other famous serial Fantomas may have to remain unseen by me, but never say never. 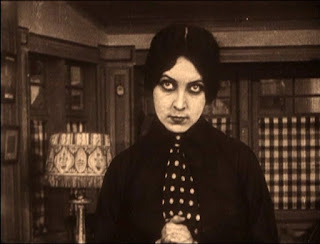 wat
The hypnotic Musidora in Judex
Posted by 1001: A Film Odyssey is produced, directed and written by Chris, a librarian. at 10:24 AM