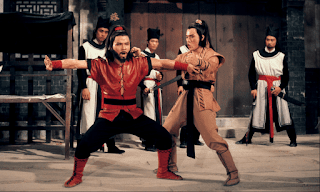 When I watched Kung Fu Theater on the late night telly during the 80's, I admit it was more for camp then anything else. The voice dubbing was poor and the one man fighting off an army of attackers by himself seemed pretty ridiculous. It took me a long to appreciate that some of these movies were actually pretty good, especially if you could watch one with subtitles. Obviously, Quentin Tarantino appreciated them. The film Five Deadly Venoms really serves as a blueprint for Tarantino's Kill Bill. The plot of this film features a dying martial arts master who sends out a novice pupil to subdue five of his former pupils (Centipede, Snake, Cobra, Lizard and Toad) who may be using their distinctive individual powers for no good. The novice has to lay back and bide his time until he discovers which of the pupils to trust, which need to be defeated and how to use his skills to defeat the enemy. 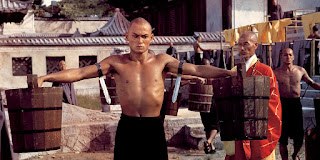 The 36th Chamber of Shaolin

The 36th Chamber of Shaolin features a young student named Liu Yude who witnesses an attack on his village by the army of General Ten Tai and vows to learn Kung Fu and have his revenge. (Liu Yude is played by Gordon Liu, who later played Pai Mei in Tarantino's Kill Bill 2.) Liu Yude goes through a rigorous 36-step training process at the local temple. He proves to be a most worthy student and returns to his village to subdue the evil General and in the process develops a new chamber to train the common people to defend themselves. The film certainly reminded me of the 70's TV classic Kung Fu, which starred David Carradine, who of course played Bill in Kill Bill.

Asian action films are probably our most popular DVD checkout for Foreign Language Films at the library. I have a customer that keeps insisting I watch the IP Man trilogy. I may check that out next, and am open to other suggestions in this category. 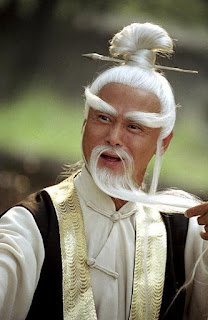 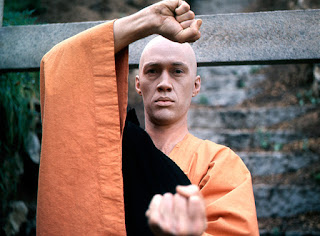 A pre-Kill Bill David Carradine
as Caine in Kung Fu
Posted by 1001: A Film Odyssey is produced, directed and written by Chris, a librarian. at 2:00 AM