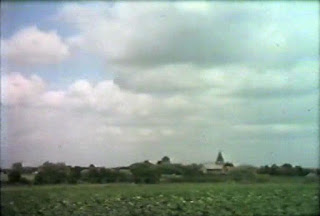 Too Early, Too Late has been the movie from the 1001 movie list that had previously been the most difficult to find. Not on DVD, streaming or at any library I could find, I kept putting this one off by necessity. Finally, I found a version of YouTube just this month (Thanks for posting, Adrift!). I told my wife that I was very excited to find this documentary that I probably wasn't going to like very much and wasn't that great.

The film itself is in two parts. The first (and shorter) section has us going around France, seeing mostly landscapes with a narration (that the 1001 book tells us) is director Hullet reading excerpts from Frederich Engels, et al. about French peasants and cites a lot of statistics about the number of people living under the poverty line.

The longer second section has us going around Egypt...showcasing workers on bicycles with an occasional tractor thrown in. We also go down rural roads and see all kinds of things, including a lot of people with wares for sale and oxen aplenty. This goes on mostly in silence, but there is occasional narration from Marxist Mahmoud Hussein about the struggles of the peasantry. "Both sections suggested the peasants revolted too early and succeeded too late," according to 1001 contributor and critic Jonathan Rosenbaum.

I actually went from questioning how am I going to sit through two hours of this to rather liking it as I progressed down these dusty back roads. I know this is an easy one to mock. You can see it as basically turning on your camera and throwing in some narration every few minutes, but I really began to wonder where is the guy on that mule going? What is his life like? I hope that was at least part of the point. 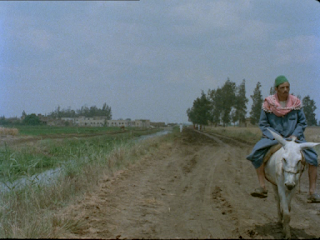 Too Late-Egyptian backroads
Posted by 1001: A Film Odyssey is produced, directed and written by Chris, a librarian. at 1:00 AM