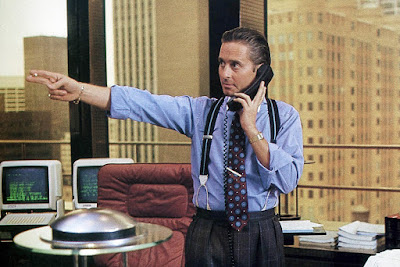 Wall Street is the story of a young stockbroker (Charlie Sheen) who gets involved with a Wall Street titan (Michael Douglas). Douglas plays the iconic character of Gordon Gekko, whose ruthlessness is exemplified in his catchphrase "Greed is good." I'm just glad that we've learned to reign in these real life megalomaniacs like Gekko with regulations that would prevent them from blowing up the economy...Unfortunately, I'm not serious about our ability to do the right thing, as the 2008 Global Financial Crisis shows. At least we learned our lesson and didn't bail these jackals out...Wait, we did that too. I'm depressed now-I think I'll move on to a more upbeat topic-TV news! 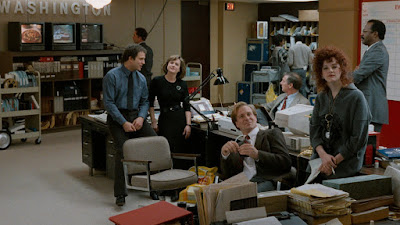 Broadcast News is the story of a network news show, led by a dynamic producer (Holly Hunter, the best thing in the film), an ace reporter (Albert Brooks) and a newsman being groomed for the network host chair (William Hurt). There are some things that seem quaintly dated viewing now, including the noted scene where Joan Cusack runs a VHS tape across the studio for them to put it in a second VHS player to add an image to a news story. Oh, 1987 and your ancient technology!

The real life network's main competitor for news in 1987 was CNN (And maybe the MacNeil-Lehrer Report). They have a lot of company these days with many cable news shows that will be happy to skew opinion to the specific biases of their audience. You can also get a lot of news on a strange post-1987 invention called "The Internet.". I get a lot of my news online these days and almost never watch network news. All I can say is no matter what news outlet you use, don't forget to check your sources!
Posted by 1001: A Film Odyssey is produced, directed and written by Chris, a librarian. at 7:40 PM