I have to agree with the statement made by some critics* that the films of Sam Peckinpah get better over repeated viewings. 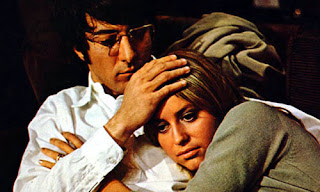 Straw Dogs is a film about a couple who are living in a remote English country home and end up in  a situation that leads the husband to a violent confrontation with locals by the film's end. But this is no good guy gets his revenge piece against the bad guys. Every character in this film is flawed in some way and no line, movement or action seems trivial or wasted in Peckinpah's film. The performances are all solid (Susan George as the wife is a standout). It has some controversial scenes for sure (The rape scene is certainly one), but no drama in the film feels gratuitous or unearned to me. It's really a stunning piece of work and may be Sam's best film. 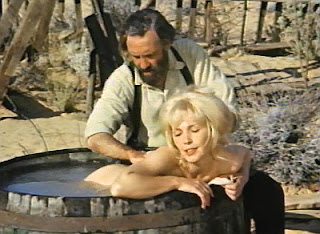 You missed a spot: Jason Robards bathes Stella Stevens
in The Ballad of Cable Hogue

After watching Straw Dogs, The Ballad of Cable Hogue was a bit of a letdown...at first, anyway. The story of a man left for dead in the old west that survives to become a desert entrepreneur had some comedic scenes that seemed a little trivial and Here Comes the Bridish, but this film did start to grow on me. Once again, a second viewing really helped with this one. It was also one of Sam's favorite of his own films. 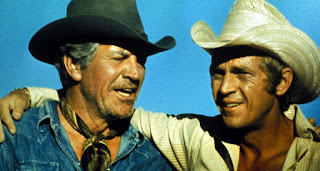 Junior Bonner seems in line with many of the character studies in American film released around this time (Early 70's). Junior is a 40ish rodeo rider who wants to ride that rascally demon bull named Sunshine. Junior (Steve McQueen) is doing it for personal pride, but he's also doing it for a little scratch, too. Junior's relationship with his roustabout father (The always engaging Robert Preston), his long suffering mother (Ida Lupino), and entrepreneurial brother (Joe Don Baker) are at the heart of the film. We also see glimpses of rodeo life and maybe more importantly, the post rodeo bonding rituals at the neighborhood bar. It's certainly a nice addition to Peckinpah cannon.

Now where is that DVD copy of The Killer Elite with the commentary track?
Posted by 1001: A Film Odyssey is produced, directed and written by Chris, a librarian. at 4:17 AM