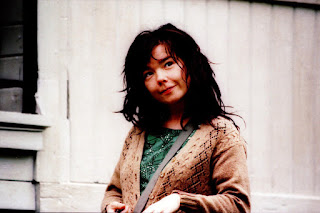 Bjork in Dancer in the Dark

Dancer in the Dark is Lars von Trier's film about a Czech immigrant factory worker (Bjork) living in the United States coming to grip with the fact she is slowly losing her sight. Much of the conflict of the film involves her trying to keep her job despite this fact so she can save enough money to get an operation for her son so he won't suffer the same fate as her. At certain points in her life, she fantasizes her life in elaborate Hollywood style musical numbers (Reminding me a bit of Pennies from Heaven). This film seems to really divide people. Some love it...some despise it. I think it's a very original piece from the always interesting Von Trier. I also think Bjork gives a stunning performance in the lead role. She truly has to run the gamut of emotions here and if I had cast my 2000 Oscar vote, it would have been a toss-up between Bjork and Ellen Burstyn in Requiem for a Dream.

Also, any film that makes me suspend disbelief enough to accept the most elegant woman in film history (Catherine Deneuve) as a factory worker has that going for it. 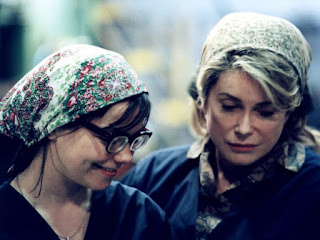 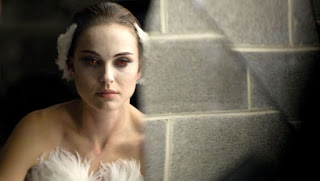 Natalie Portman in The Black Swan

Natalie Portman actually did win an Oscar for her portrayal of a dance in The Black Swan. When I fist saw it, I asked some of my friends and family who have seen it what they think. I 'm following their comments with my comments about their comments!

My niece: It was really strange. Not what I had in mind. Some of those images were just creepy, creepy, creepy…But I liked it. (I'm glad you seemed to have learned that creepy isn’t necessarily a bad thing when seen in an artistic context. It’s an important life lesson.)

My other niece: I thought it was the coolest move ever! But I could have done without the scene with the old man playing with himself on the subway. (I will also have nightmares about that scene.)

My son: Didn’t really care for it. I prefer anime. (We’ll watch a Miyazachi movie  next, I promise)

An online friend: I must be getting old. I can remember when Barbara Hershey was such a cutie! Now she’s playing parts like this as if she were doing an imitation of the mother in Carrie! (I asked him what he thought of the movie overall, and he said he found it very creative, but didn’t like the scene with the old man on the subway. Note: Since it seems to be a consensus, I would ask Darren Aronofsky for his future films to omit all scenes with old men diddling with themselves.)

Movie buff friend at work: Aronofsky goes from a film about the psyche of washed-up professional wrestler in The Wrestler to an up and coming ballet star in The Black Swan with only mixed results.
(I asked him to embellish and he just threw up his hands and walked away from me.)

My best friend: Not really my kind of flick, Sam. My old lady just insisted on watching, and seeing as it was her birthday and all, I agreed. So much dancing. So boring. But then comes the scene with the two women. You know, he, he he. When they venture to the island of lesbos? Now that’s my kind of movie! Don’t quote me on that. My old lady gets jealous, you know. (My best friend calls everyone Sam. His wife actually left him months ago, so his comments about his “old lady” concern me greatly.)

My wife: Why do you keep talking about The Black Swan? I think you’re just obsessed with Natalie Portman. Maybe you should just off and marry Natalie Portman! But when you do, don’t forget to give her this…(My wife then broke a bottle of Michelob over my head and stuck the jagged edge of it solidly into my gut. Despite the pain, I have to admit it took me to a level of artistic consciousness that I have never attained before.) 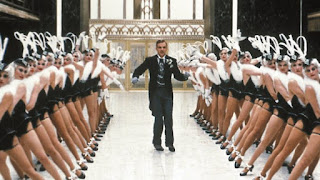 Steve Martin in Pennies from Heaven
File under: movies I need to re-watch
Posted by 1001: A Film Odyssey is produced, directed and written by Chris, a librarian. at 4:00 AM