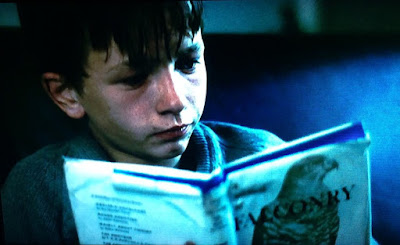 One has only to look at Ken Loach's Kes (1969) and I, Daniel Blake (2016) to speculate that he is one director that has made films with a decided sympathy for the working class. In Kes, Billy is poor, not a great student, not a great footballer, with a single mom and a bully of an older brother. He finds an outlet in raising a kestrel/falcon that he finds. It gives his life some semblance of meaning as well as a  positive outlet. I, the viewer find myself interested in Billy's life and the lives of those around him, though the future for many in his circle appear to be pretty bleak. 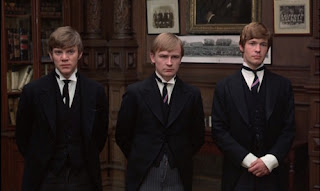 Young Mick and friends,
awaiting discipline and plotting revenge
in If...

A more upper class version of English public school than Kes is shown in Lindsay Anderson's surreal boarding school fantasy, If... This school ain't Tom Brown's School Days. Most of the boys appear to be non-conformists of a type, led by Mick (Malcolm McDowell). Mick's group of friends exhibit anti-social behavior at times, but at other times are the victims of upperclassmen themselves, not to mention the school administration. The final scene revolves around the school's founders day celebration which culminates in many of the students led by Mick assembling weapons and opening fire on all who have gathered. The gunfire is returned, only Mick and his group seem immune to the bullets. I'm usually interested in British films of this nature and I did find much of this provocative. However, If... may be something that I would have liked more in my twenties than in my fifties.

Malcolm McDowell returns to the role of Mick in Anderson's O Lucky Man!, which I remember as being even more offbeat than If... In fact, I had a friend who told me he took a date to see O Lucky Man! and when they left the theater, she hated it so much she began beating on him with an umbrella. "I thought she might like to see something a little off-beat," he told me. "I guess you were wrong," I said. 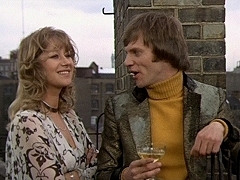 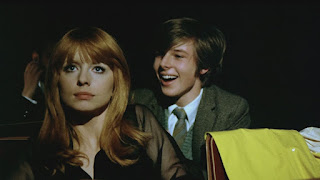 Young Mike with Sue,
the object of his affection
in Deep End


In Deep End, fifteen-year-old Mike has dropped out of school altogether and is working at a bath house. He has to encounter "old" women and some men who want a little more from him than a towel and a bottle of medicated shampoo. Mike becomes friends with a pretty attendant named Sue (Jane Asher, who I'll always think of as Paul McCartney's 60's girlfriend). Sue plays along with him at first and then returns some of his flirtation. But does she go too far? Or not far enough? The boy is confused...It's tough being a teen in Britain during the 60's!...Just remember to at least play some Cat Stevens along the way and things might work out...or not.
Posted by 1001: A Film Odyssey is produced, directed and written by Chris, a librarian. at 5:00 AM