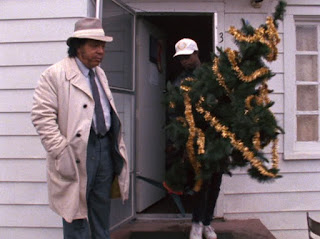 Evictions from Michael Moore's Roger and Me
"I'm just doing my job. Nothing personal."

Roger and Me was documentary filmmaker Michael Moore's first film. It depicts Moore's quixotic quest to interview GM president Roger Smith and get his reaction to the closing of the GM plant in Flint, Michigan. Moore is often criticized for creative editing to slant his point of view. Maybe...and he does put himself in the middle of his movies (quite a contrast to documentarians like Frederick Wiseman). However, he does let many people who you know disagree with Moore have their say and they more often than not put their foot in their mouths at best and come across as mostly lying assholes.

I say: Keep up the good work, Michael! And thanks for speaking for those who often have no one else to speak for them. 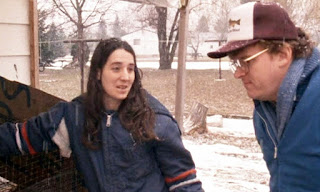 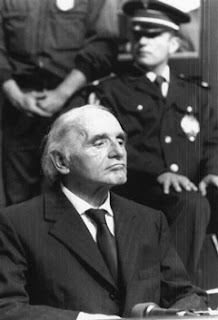 Klaus Barbie on trial
in Hotel Terminus: The Life and Times of Klaus Barbie


Marcel Ophuls is also a documentarian who doesn't mind putting himself in the middle of his film. He is probably best know for his film about the French Resistance The Sorrow and the Pity from 1972. Hotel Terminus is his 1988 film is about infamous Nazi war criminal, Klaus Barbie. Ophuls tried to talk to just about everyone still alive at the time who knew or had anything to do with Barbie. Some of the better moments in the film are watching some of the interviewees start to squirm when they are trying to defend themselves and Ophuls is not afraid to twist the knife when they are doing so. The whole film is a lot to take in (and quite lengthy) and is anything but casual viewing. Hotel Termimus is an admirable venture and serves as a pretty important historical document. 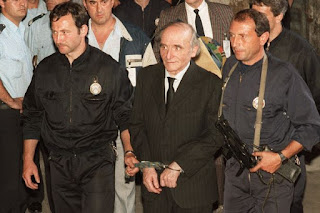 Klaus Barbie in handcuffs
in Hotel Terminus: The Life and Times of Klaus Barbie
Posted by 1001: A Film Odyssey is produced, directed and written by Chris, a librarian. at 11:15 PM