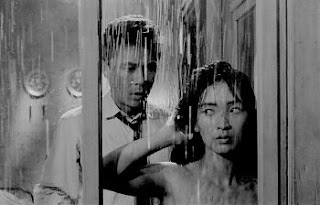 Kim Ki-young's 1960 The Housemaid is a film that seems quite ahead of its time with its dark tones, bleak characters and familial violence.

The plot has a piano teacher at a factory who has to struggle to make ends meet for his wife and two kids. A couple of the women at the factory develop a crush on the teacher, one of whom becomes the family housemaid and ends up having an affair with the admittedly reluctant teacher. The housemaid gets impregnated by the man and ends up controlling the whole family through blackmail. She ends up being responsible for the death of one of the children before the housemaid and the man commit suicide in front of his innocent wife. But wait...there is an afterword that repeats the first scene where the man reads to his wife a newspaper story about a housemaid that has an affair with her boss and the wife laughs it off. The man then turns to the camera and tells the audience to watch out and not let this happen to you. It may seem like a little bit of an "it was all a dream ending," but I'm guessing the filmmaker or the studio was too afraid to let the extremely dark ending play itself out without giving the audience a sign of reassurance. The film definitely reminds me of later films such as Fatal Attraction and The Hand Rocks the Cradle. 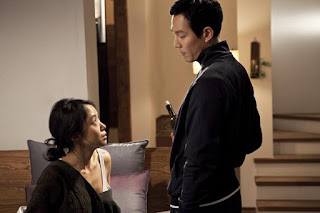 
The 2010 version of The Housemaid was so different than the original I had to check to see if it was actually a remake. (It is so listed in the credits). This go round is clearly from the point of view of the housemaid, who gets employed into a house with a rich family this time. The husband is not a struggling piano teacher, but a rich businessman who has no qualms about using anyone how he pleases. His wife is a class A bitch (unlike the good wife of the original), whose mother is even worse than the daughter! The only sympathetic member of the family is the child who does bond with the housemaid. The housemaid does have an affair with the husband, but our sympathies are completely with her this time out. The husband does play the piano, which does give this one some link to the original. If the original had an overly comforting ending, the 2010 makes up for it with the housemaid committing suicide in front of the family in dramatic fashion. Nothing comforting about the conclusion here.

These Housemaid movies made for an interesting double feature, though I'd certainly watch the first one before deciding whether you want to delve into the remake or not.
Posted by 1001: A Film Odyssey is produced, directed and written by Chris, a librarian. at 3:30 AM