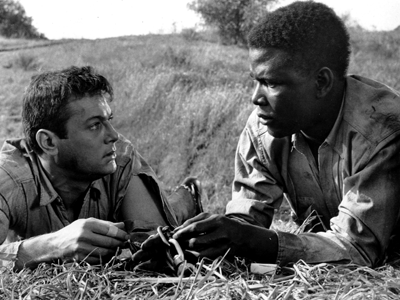 The recent death of Bernie Schwartz BKA Tony Curtis might be a good time for a re-evaluation, at least for me. Part of my initial dismissal of him as a bit of a lightweight stems from the old Golden Turkey Awards book by Michael & Harry Medved which places him as a finals candidate for the Worst Actor of All-Time (He gets beat out by Richard Burton).

There was also an episode of Leave It To Beaver where June tells the Beave to wash his neck or the like before dinner and Beaver replies with something similar to, "Gosh Mom, a guy doesn't have to look like Tony Curtis just to eat franks and beans! (queue laugh track)"

Yes, it was easy to dismiss TC in the mind. Misfired epics like The Vikings and Taras Bulba and The Manitou (which has to do with an ancient spirit embryo growing on the back of woman's neck or something like that), the Jerry Lewis/Tony Curtis teaming in Boeing, Boeing and that great epic sequel The Bad News Bears Go to Japan don't help the defense too much.

However, there are a few of his roles (all in the 1001 movie book) which are memorable. The teaming of Jack Lemmon/Marilyn Monroe and Curtis in Billy Wilder's Some Like It Hot, Spartacus (His Brooklyn accent really isn't that bad.), The Sweet Smell of Success (he's actually pretty good in this as the ruthless press agent) and the film I just watched The Defiant Ones. The Defiant Ones is Stanley Kramer's allegory of black/white relations featuring too escaped convicts, the bigoted white man (Curtis) and a black man (Sidney Poitier). They fight, call each other names, but eventually learn that they need each other to survive. Some of it seems a bit dated, but is still a worthwhile film. And any film with both Lon Chaney Jr. and Carl "Alfalfa" Switzer in it has that going for it.
________________________________________________________________

Here are some of the notable Kramer omissions:

Champion (A defining Kirk Douglas role loved by Douglas impressionists like Rich Little who like to blurt out, "I want to be champ!")
The Member of the Wedding (Based on Carson McCullers famous story, exactly the type of film that I thought my slip in on the list.)
The Caine Mutiny (How can you leave out Bogart and the Strawberries?)
On the Beach (Highly thought of film and book, though I haven't seen it.)
Judgement at Nurembug (How could they leave out Judgement at Nuremburg?)
Inherit the Wind (Fictional version of the Scopes trial would definitlely be on my list.)
It's a Mad,Mad,Mad,Mad World (A personal favorite I admit, but you'll never see another comedic cast like this.)
Ship of Fools (Nominated for a lot of awards at realease, but I admit it's kind of hard to sit through today. Good omission.)
Guess Who's Coming to Dinner (Not as well thought of as it was at the time of its release. I'd probably leave this one out as well.)
R.P.M.(Not a great movie, but memorable as one of the 60's student protest trilogy, along with The Strawberry Statement and Getting Straight.

Let's work on this in future editions, eh 1001 Movies editors? (I know, they aren't listening to me.)
Posted by 1001: A Film Odyssey is produced, directed and written by Chris, a librarian. at 2:40 PM