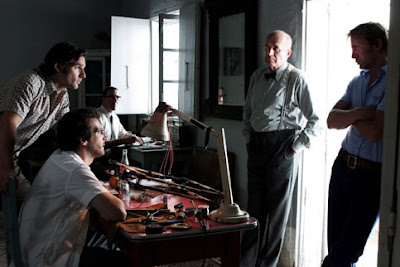 The 1972 Munich Olympics were the first Olympics that I can remember. Those involved will always be stuck in my memory because they seemed bigger than life to a nine-year-old. Among the athletes:

· Seven gold medal winner Mark Spitz, who used the Olympics as a stepping stone to appear in a Bob Hope special, at least that’s the only other thing I can remember him doing afterwards.
· Frank Shorter, who won the Marathon despite an imposter running in front of him when he entered the stadium for his final laps. (Featuring Jim McKay’s commentary on the imposter. “That man is getting applause that belongs to Shorter!” Or something like that. It’s just not the Olympics without the commentary of Jim McKay.)
· Dave Wottle, Gold medal sprinter (who looked nothing like a sprinter) and his unforgettable golf hat.
· Long distance runner Jim Ryun getting tripped during a race he was favored to win-though I still admire his futile, hopeless attempt to get back in the race.
· Vince Matthews and Wayne Collete, 400m medalists, who talked during the playing of National Anthem at the award presentation. (Not as memorable as the medalists giving the black power salute, but that was a different Olympics, a different time.)
· Olga Korbut, the greatest Olympic gymnast ever until four years later when Nadia Commenci became the greatest Olympic gymnast of all time.
· The Men’s basketball final where the U. S. got screwed over
by the refs in the final game against the Russians. (Editorial note: We should still field a team of college players no matter what them other countries do.)

Sadly, what the Munich Olympic Games will mostly be remembered for is the murder of Israeli athletes by Palestinian terrorists. I'll never forget Jim McKay's dramatic commentary as the events unfolded ("They are no more").

This clip of Jim McKay is used in the beginning of Stephen Spielberg’s film
Munich. This film is more about the covert operation by the Israeli government to find(and kill) those responsible for the murders than the Munich murders.Those murders are just the prelude here, but are smartly interspersed throughout the movie, so the viewer gets a greater understanding of what happened, or at least the films version of what happened.

Though the movie wasn't what I was expecting, it did have a lot to say about the difficulties involved in tracking, identifying, and killing terrorists.I like the way this is summed up by one of the movie’s characters:

The drunk Americans could have been CIA, for all we know Louis is CIA. They work both sides, everyone does. Or Louis is Mossad, now maybe he isn’t, but they’re using him to feed us information. There’s no direct link. Or Mossad’s giving it to the CIA, which is giving it to Louis and Ephraim’s demanding we give him Louis because we expect him to do…

How can you kill evildoers when you can’t even determine who they are?

Tough for me to watch a movie about terrorism so soon after seeing the classic The Battle of Algiers, but Munich is pretty gripping in its own right.
Posted by 1001: A Film Odyssey is produced, directed and written by Chris, a librarian. at 10:32 AM