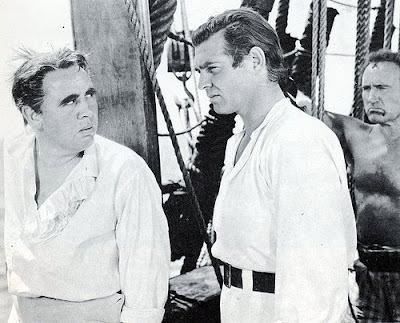 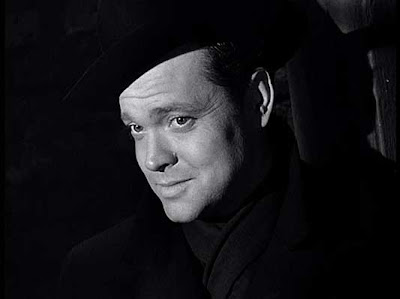 In 1998, the American Film Institute (AFI) published a list of top 100 American movies. There have been updates and separate lists in different genres, but of the original list, I had seen all but five of the films. A workable number indeed! I may never get through the 1001 movie list, but as God is my witness I could at least complete the AFI list!

Completing the final five, I had to hop aboard an 18th century British vessel
headed for Tahiti, a smaller boat heading down an African river in pre-World
War I Africa, explore the darker side of post World War II Vienna, the lighter side of World War II Paris and finally venture to the American West.

Watching a lot of many movies from the 1930's-50's lately, I've noticed so many memorable performances from supporting players that often had careers that had well over a hundred film credits. Each film listed here I will give a supporting performer award in honor of Elisha Cook Jr.,(memorable as the gunsel in The Maltese Falcon and small time hood in Stanley Kubrick's The Killing) the shrimpy second banana who either supplied the exposition, got gunned down in a crossfire or at least went to fetch a cup of coffee for a much bigger star.

(Film #1) Mutiny on the Bounty (1935) cost two million dollars to make, which in todays money is…a lot. It seems like the reputation of this movie has faded a bit over time. In fact, the AFI dropped it out of the top 100 for its 2007 list. I think it’s still a pretty good adventure story, though the heroism of Fletcher Christian in the movie versus the heroism of the real Fletcher Christian seems to have been a bit exaggerated. (Movies tend to do that don't they?). And who could ever forget Charles Laughton's Captain Bligh?

Favorite Mutiny on the Bounty quote:
Officer Byam: "Hithiti, your language is most un-English. It means exactly what it says. Here are the three pages on your words meaning, "look." There's one for the downcast eyes, one for the sidelong glare, one that invites, one that consents. A whole language of looks!"

Hitihiti: "Byam, you think too much. One day, you head go crack!"

Elisha Cook Jr. supporting performer award:
The first Elisha Cook Jr. supporting performer award goes to the hard working, but largely forgotten Donald Crisp. At least I had forgotten about him, though he did win an Oscar for How Green Was My Valley. How can you have a movie with a big cast from this era without a crusty character actor like Donald Crisp? I thought about giving the award to Tahitian island girls Movita and Mamo, but Donald really deserves it.

(Film #2) is director Carol Reed and writer Graham Greene's The Third Man, a film noir set in post WWII Vienna, where the black market is running amuck. This is really the film of these five that I would rate as a must see. But how did a largely English film make the AMERICAN Film Institute list, whether deserving or not? David O'Selznick was one of the producers, and it does have American stars Joseph Cotten and Orson Welles, so I guess that was enough. Regardless, this film should be seen no matter what list it pops up on. The score features nothing but a zither, which I thought was great. Opinions on the zither differ.

Favorite The Third Man quote:
Harry Lime: "In Italy for 30 years under the Borgias they had warfare, terror, murder, and bloodshed, but they produced Michelangelo, Leonardo da Vinci, and the Renaissance. In Switzerland they had brotherly love - they had 500 years of democracy and peace, and what did that produce? The cuckoo clock."
or Holly Martins: "Hey, satchelfoot! Who's your boss?"
I don’t know why I like this second quote so much. It’s what Cotton says right before he finds out Harry Lime is still alive. If I am calling out to someone and don’t know who it is, I like to yell out, “Hey Satchelfoot, who’s your boss?” Don’t you? No? Well, lets move on then.

Film #3, An American in Paris, like Mutiny on the Bounty, was another best picture winner. It may not be the best movie to see right after The Third Man. The comparison makes An American in Paris seem too glossy and overproduced. I eventually got into the film, but it did take some time. There are some fine production numbers and memorable songs (That Wonderful, Fabulous song) and Gene Kelly was one of the most likable
stars around (Let’s just try to blot out from our minds his later appearances in Xanadu and Viva Knievel and everything will be fine).

Favorite An American in Paris quote:
"I got music...I got rhythm...I got my gal. Who could ask for anything more?"

Film #4 The African Queen-Famous author C. S. Forester, acclaimed director John Huston. Only teaming of Humphrey Bogart and Katherine Hepburn. Irascible boat captain and spinster head down the river through many obstacles before they find their freedom...and each other. If this movie was ever remade, it would be a big time chick flick. Brad Pitt and Sandra Bullock, maybe? Nah. A beloved movie to many, I'm glad I saw it, but was definitely not my favorite film of either star or the director.

Favorite The African Queen quote:
Allnut: "That's what you get for feeling sorry for people. I ain't sorry no more you psalm-singing skinny old maid!"

Elisha Cook Jr. supporting performer award: to Robert Morley. This is a fairly difficult movie to give a supporting performer award to, as it's almost an exclusive cast of two, and Morley has the rather thankless and small role of Katherine Hepburn's brother, who dies in the first fifteen minutes of the movie. However, I'll give Morley a lifetime achievement for future scene stealing roles in Who is Killing the Great Chefs of Europe and as a snobby theater critic who ends up having to eat his own prized poodles in Theater of Blood.

Film #5 Shane
My final film of the AFI 100 list is the George Stevens Western Shane. It is a beautifully photographed story of the mysterious ex-gunfighter Shane who aides a farmer and his family against those that want to take over his land.

Favorite Shane Quote:
Shane: "There's no living with a killing. There's no goin' back from one. Right or wrong, it's a brand... a brand sticks."
Or if you don’t like that one, let’s stick with
Joey: "Shane, come back!"

And the final winner of the Elisha Cook Jr. supporting performer award (And you probably see where this is headed) goes to: Elisha Cook Jr. Who's going to
do the exposition without Elisha Cook Jr.? Who's going to be the sacrificial lamb? Who’s blood must be avenged by the hero? Who's going to provide the comedy relief? Unlike The Africa Queen, there are a bevy of worthwhle suporting players in Shane: Edgar Buchanan, Van Heflin, Jack Palance among others. But how can I deprive Mr. Cook of his own award?

The legacy of Elisha Cook lives on in today's movies in actors like that guy…you know the one I mean, he's in everything. What was his name again?

The only omission: Entry #99 Guess Who's Coming to Dinner. (Now don't you feel better for knowing that?)

Here’s the official site of the AFI if you want to see the original 1998 list.
http://www.afi.com/100years/movies.aspx 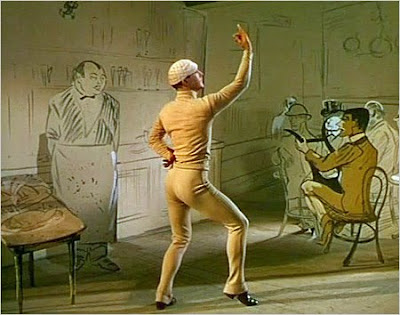 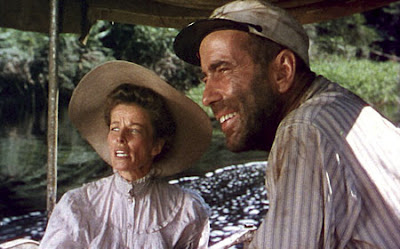 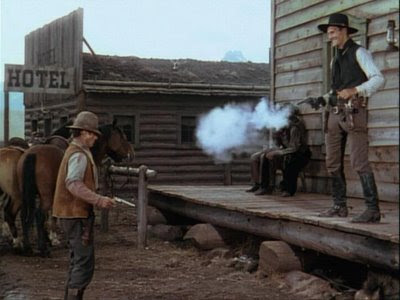 Posted by 1001: A Film Odyssey is produced, directed and written by Chris, a librarian. at 9:17 AM