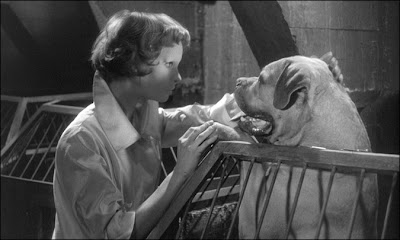 Film # 1 The Horror Chamber of Dr. Faustus
A Macabre Masterpiece!
Never before have audiences been so terrified. Never again will you experience a tale of terror to compare with The Horror Chamber of Dr. Faustus! (narrators voice amplified).The London Observer compares this to "the ghastly elegance, which often suggests Tennessee Williams in one of his more abnormal moods." Featuring Pierre Brasseur as a depraved scientist who uses women in the most frightening way imaginable. Alida Valli as the accomplice who procured the young girls he needed so desperately! Juliet Muyniel as the innocent victim of a madman's perversity The Horror Chamber of Dr. Faustus! (voice amplified again). A Motion picture as fascinating as it is fantastic! As frightening as anything you will see on the motion picture screen!

Film # 2 The Manster
A terrifying creature is on the loose! Half man! Half monster! (We hear gurgling screaming in the background).A fiendish creature threatening to destroy all that stand in its way! An American reporter in Tokyo who SHOCKINGLY became a victim of a shocking scientific experiment that turned him into half man...half monster...
THE MANSTER! (announcers voice amplified). Once a normal man. Now a hunted animal! There's panic in the streets as the unheard of terror of a half man and half monster runs wild through the city. Don't miss THE MANSTER! (announcers voice amplified).A genuine thriller in the most shocking sense of the word!


The above promos are real. But how are they relevant to the 1001 Movies You Must See Before You Die book? Yes, indeed. One of them is indeed an entry in the book. Let's be thankful it's not The Manster.

The Horror Chamber of Dr. Faustus is actually a later English dub of Gerorges Franju's French horror film, Eyes Without a Face. And no singing the Billy Idol song of the same name while reading the title. And no confusing it with Eyes Wide Shut, either. The films have little in common. On second thought, the main character does wear a mask during key parts of both films...but I don't want to go down that road. The actual French title sounds a bit more elegant anyway, Les Yeux Sans Visage.

The tone, texture and time period of Eyes Without a Face reminds me a bit of Carnival of Souls (which I thought should have been included in the book.) The plot involves a doctor (who is oddly not named Faustus) who is trying to find a suitable replacment for the face that his daughter lost in an accident that was his fault. I'm not sure how many women the doctor operates on unsuccessfully before finding someone that is a compatible donor, but we see enough to know he is a MADMAN! He also does experiments with innocent dogs, so he's definitely a bad guy in my book. Spooky and macabre, I suppose I can accept this is an entry for the book, if nothing else as a change of pace.

And anyone know where I can get a copy of THE MANSTER? 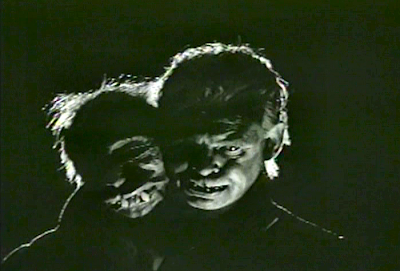 Posted by 1001: A Film Odyssey is produced, directed and written by Chris, a librarian. at 8:39 AM