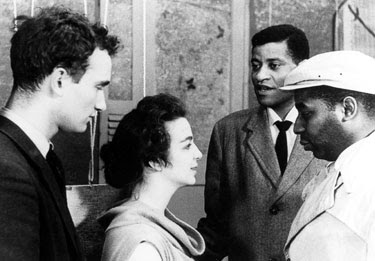 Kaplan's chapter, The Off-Hollywood Movie, discusses the 1959 John Cassavetes film, Shadows. Cassavetes railed against Hollywood movies, where he said that commercial considerations were subtle, but dominate. He was more interested in the neo-realist filmmakers of Italy, who shot many of their films in the streets of Rome. Cassavetes decided to shoot a neo-realist film of his own in the streets of New York City. The result was Shadows, a story of a young black woman who passes for white, though a plot synopsis doesn't really do the movie justice, as it is largely free form and at least partly improvised. You know a 1959 movie that has a line that scoffs at the beat generation is pretty hip (or thinks it's pretty hip). Shadows, as well as other later films by Cassavetes, weren't big money makers, but did influence a generation of moviemakers such as Martin Scorsese, Peter Bogdanavich and Robert Altman.
I'm just glad that commercial considerations in today's American cinema have now become secondary to artistic considerations. (Hey, stop laughing!)

1) The Beat Generation- Not to be confused with Beatniks starring Peter Breck, but The Beat Generation does at least have Jayne Mansfield imitator Mamie Van Doren. Or was she a Marilyn Monroe imitator? Or am I getting these movies mixed up? Well, no matter.

3) Gidget-Yes, the premiere of the cute little beachnik featuring Sandra Dee and later spawned a Sally Field TV series and…who am I kidding? I’ve never actually sat through a Gidget movie, though I have used the phrase “Big Kahuna” on occasion.

4) Journey to the Center of the Earth-Sure it was based on a Jules Verne story and sure it later became the basis for Rick Wakeman's magnum opus...but really, future archaeologists will unearth an old VHS copy of this and ask only one question: So, why was this Pat Boone ever popular, again?

6) Solomon and Sheba-One of those sword and sandals epics that featured Yul Brynner with hair, no less! and the Ubervoluptuous Gina Lollabridgida.

7) 30 Foot Bride of Candy Rock-The only Lou Costello effort without Abbott. I remember watching this as a kid and fruitlessly WAITING for Bud Abbott to appear.

8) Compulsion-Really should be in the 1001 movie book. Based on the Meyer Levin novel (an interesting read) about the Leopold and Loeb murder case and features Orson Welles as the Clarence Darrow stand-in as well as a pre-Quantum Leap as Dean Stockwell as one of the murderers.

9) Pillow Talk-If you have to watch a Doris Day/Rock Hudson comedy, this is probably the one to see. (But you don't have to, it's really not required.)

10) Plan 9 From Outer Space-You can’t make a list of movies from this year without a reference to the most famous bad film of all time. Though hardly the worst film of all time! Not as long as Manos, The Hands of Fate and Monster A Go-Go are still around.

There’s also Hiroshima, Mon Amour which is a 1001 Movies entry and was directed by Last Year at Marienband Alain Resnais. I first saw this in a history of film class at Georgia State xx number of years ago, but don’t remember much about that viewing.
In seeing it again, I like it more that Last Year at Marienband, though it still might be one that I have to see a few times to appreciated fully. It starts out in semi-documentary form dealing with the aftermath of the 1945 atomic bomb that was dropped over Hiroshima. The film jumps to a modern day (1959 modern day of course) showing us a brief (very brief) affair between a French actress and a Japanese architect. (The plot summary says he was an architect, but I don't remember them calling him an architect. I must have been out of the room when they mentioned it.) She has past demons from the war hanging over her largely involving a past lover who was killed. He has the memories of the atomic bomb hanging over him. Features some interesting tracking shots (not overdone like in Last Year at Marienband), gives a good feel of the city and has two appealing leads. Worth a look, but may require a second (or third) viewing. 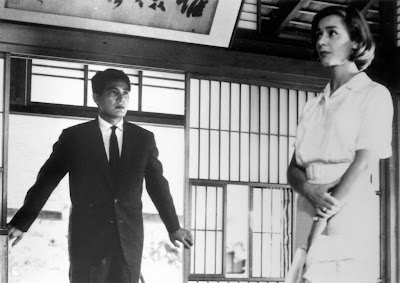