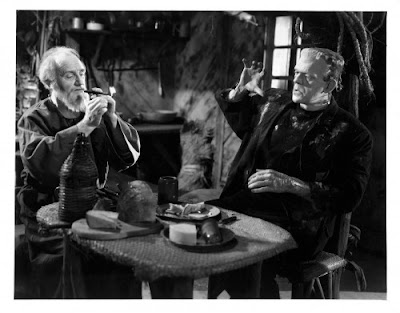 Bride of Frankenstein (1935)
Expectations: See expectations for yesterday’s Frankenstein listing and throw in a hissing bride, a blind hermit and a little Shelley and Byron to give the proceedings some class.

After viewing: I have to call into question the basic structure of my memory palace when it comes to The Bride of Frankenstein. I’ve certainly seen it, But only vaguely remember Dr. Frankenstein’s mentor/associate/rival/villain Dr. Pretorious. I don’t remember Pretorious’s experiment of growing little people in specimen jars, either. Many film historians prefer this one to the original. I’m a little torn. Boris Karloff pulls off his fractured speech scenes well, but I still like the rawness of the original. So it goes.

And the Elisha Cook Jr. supporting player award goes to…O. P. Heggie as the blind hermit. O.P. Heggie? Why would I choose O. P. Heggie over such supporting stalwarts as Ernest Thayer as the sinister Dr. Pretorios! Or Elsa Lanchester, who plays Mary Shelley and the Bride? Or the always funny comic relief actress Una O’Connor? Or again to the ubiquitous Dwight Frye? Or even to cameos by future character actor Hall of Famers John Carradine and Walter Brennan?

Heggie (as the blind hermit who befriends the moster) has only one scene. As audio commentator Scott MacQueen points out, this scene could easily lapse from being touching and giving important insight into the monster’s character into a Mel Brooks parody forty-five years too soon. But the scene works, and credit is often given to Karloff, but give the kindly Heggie a nod, too.
Posted by 1001: A Film Odyssey is produced, directed and written by Chris, a librarian. at 12:40 PM