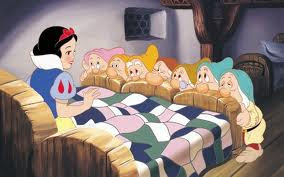 I’ve seen a number of the classic Hollywood movies of the 1930’s.But going over some of the titles in 1001 Movies You Must See Before You Die book, I noticed more than a few omissions from my movie viewing resume. For the past two weeks I've tried to try to fill in some of those gaps as well as re-watch some old favorites. I’ve listed my expectations for each film going in and stated whether these expectations are reached or not. And I gave each film my Elisha Cook Jr. supporting player award strictly for the reason that I thought it would be fun to do so. It was and I gained a new appreciation for movies of this era also. And my fourteenth and final entry for this segment is...

Expectations:I don't think I've seen this all the way through since...could it be the 60's?

After viewing:If I thought Frankenstein was criticism proof, this one is probably even more etched on the movie going public. The dwarfs are a magnifcient creation, the witch is dastardly evil, and Snow, though not overly complex, fills the heroine role nicely. Only the prince, practially edited out of the whole picture, comes up short. But I guess you need him to fill the prophecy.

And the Elisha Cook Jr. supporting player award goes to...Grumpy. It's tempting to give this to the Queen/Witch who set the standard for those evil Disney villains to come. But it's really Grumpy who holds the piece together. Differentiates himself from the other dwarfs by initially being so hostile to Snow White. So when he does come around to Snow, it is that much more meaningful. And when Grumpy weeps after Snow dies, well...I'm going to need a tissue just thinking about it.
Posted by 1001: A Film Odyssey is produced, directed and written by Chris, a librarian. at 12:37 PM