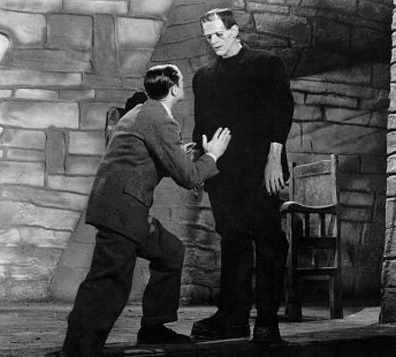 Frankenstein (1931)
Expectations: Seeing this one again elicits plenty of expectations and memories such as,
1. Boris Karloff billed as ?
2. Colin Clive yelling (It’s Alive! I’ts Alive. Now I know what it’s like to be God!)
3. Those villagers and their handy torches at ready to change down any monsters that trouble their village
4. Frankenstein’s memorable growl
5. My Aurora monster model of the Frankenstein monster, which I still have.
6. That great Dr. Frankenstein laboratory with those flashing mechanisms that are all quite important I’m sure!
7. The hunchbacked dwarf, Fritz
8. The monster’s fiery death, which of course he escapes from for the next film.
9. The burgomaster. The only other time I think of burgomasters is if I see I rerun of Santa Claus is Coming to Town.
10. And of course, a lot of Young Frankenstein references.
11. Oh yeah, and little girls still don’t float like flowers.

After viewing: Frankenstein is almost criticism proof. It is just too iconic.

One note on the Karloff vs. Lugosi debate. Despite Lugosi’s kitsch appeal and portrayal in Tim Burton’s film Ed Wood, (The credits state Lugosi memorabilia outsells Karloff memorabilia two to one.) the clear winner in this battle is Karloff, through memorable performances as heavies in films like The Body Snatcher and Tower of London to his last major film Peter Bogdanavich’s Targets, where he essentially plays himself, to the voice of The Grinch That Stole Christmas…Karoloff is the man. I'm glad I could clear this up.

And the Elisha Cook Jr. supporting player award goes to…Dwight Frye as Fritz, the hunchbacked dwarf who takes pleasure in tormenting the monster. I’ve given Mr. Frye a tribute on these pages before for Renfeld in Dracula (1001 Dracula entry from 1/12/10) but he’s the clear winner here not only for Fritz, for his return as a different but equally creepy assistant in Bride of Frankenstein.
Posted by 1001: A Film Odyssey is produced, directed and written by Chris, a librarian. at 1:38 PM