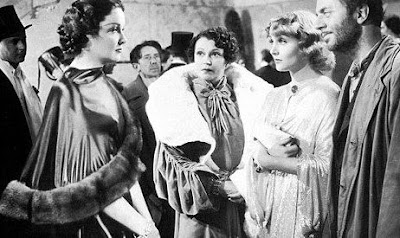 My Man Godfrey (1936)
Expectations: Ah, nostalgia. I saw this during the first film class I was in during my Freshman year at West Georgia College. Good ole Mrs. Alexander. I remember enjoying this film all those years ago, but for some reason, I think I won’t like it as much this go round. Sorry, Mrs. A.

After viewing: I was wrong. I liked it even more this time. It is fun, witty, well paced, well acted and socially relevant. Carole Lombard and William Powell were both perfect in the leads. It officially regains its crown as my favorite screwball comedy. Shouldn’t have doubted you Mrs. A.

DVD note: On most DVD's, I'll usually skip anything labeled blooper reel. But a blooper reel from a 1936 film with Carole Lombard saying, "Ah, Shit!" is definitely worth checking out.

And the Elisha Cook Jr. supporting player award goes to…Eugene Pallette as the put upon father of a screwy rich family The gravelly-voiced Mr. Pallette is quite funny, but you can’t help but feel sorry for the the ‘poor’ chap.
Posted by 1001: A Film Odyssey is produced, directed and written by Chris, a librarian. at 1:34 PM