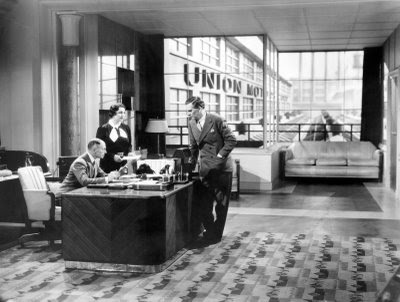 Dodsworth (1936)
Expectations: I’ve read a couple of Sinclair Lewis novels, Arrowsmith being the one in recent memory. I knew this film was based on a Lewis novel. My expectation was for a good story, though I didn’t know what the plot was about.

After viewing: When you think of some of the great film stars of the 30’s studio era, the first names that come to mind are probably not Walter Huston and Ruth Chatterton. Huston plays Dodsworth, the retired automaker, trying to see what life has in store for him in middle age. Chatterton plays his wife Fran, who is fighting against the aging process every step of the way. Both of these performers are quite good, but Huston especially struck a chord with me. Lewis’s story was strong and well adapted by Sidney Howard. Of course, I’m just going to have to make that leap considering I haven’t read the novel. I’ll just go by the end product and rate the adaptation a success.

And the Elisha Cook Jr. supporting player award goes to…screenwriter Sidney Howard. Most fans of classic movies can identify Margaret Mitchell as the author of Gone With the Wind. But who wrote the screenplay for the most widely viewed film of all-time? I’m willing to bet a majority of film fans couldn’t come up with the name Sidney Howard (At least I couldn’t). To paraphrase William Goldman’s sentiment on screenwriters, “Don’t’ mind him, he only wrote the damn thing!” Well, Howard adapted the Dodsworth screenplay too, and did a damn good job!
Posted by 1001: A Film Odyssey is produced, directed and written by Chris, a librarian. at 1:30 PM