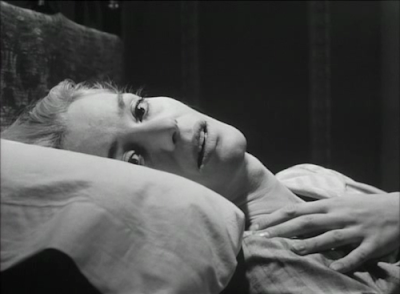 The 1001 blogger has decided to watch as many films as he can from one of his favorite filmmakers, Ingmar Bergman. He knows despite the potential positive aspects of such an adventure, the road may be fraught with as much potential for emotional distress. This is his fourth scheduled session, and has been told that an advanced specialist will be brought in this week to evaluate him.

(The 1001 blogger enters his psychiatrist’s office and has a seat. No one else is in the room. He notices the chair where his psychologist usually sits has an odd looking metal device on it. He gets up and studies it and recognizes that it resembles the baby monitor his parents used to check up on him during his infancy. This link to his past causes him to smile. He returns to his seat. As soon as he sits down, a voice comes from the monitor.)

Monitor: (In a Swedish accent) Hello. How are you?

1001 blogger: Oh my God. I know that voice from interview clips. You sound just like Ingmar Bergman! But it can’t be, can it?

Monitor: I neither affirm nor deny your claim. Just tell me about this week's movies. I have studied your case file.

1001 blogger: This is something else. A metal box from my childhood with the voice of Ingmar Bergman coming out of it. Wow! Anyway, you asked about the movies. Not exactly uplifting fair, I must say. Cries and Whispers. I have to admit I didn’t totally get it. I think it has to do with the whispers we speak softly should be said loudly and our cries often go unheard as if they were whispers.

Monitor: I don’t think that’s it.

1001 blogger: Yes, that doesn’t sound quite right now that I say it aloud. But a question that arises from the movie is can we experience perfection and be grateful for the life which gives us so much or is it all just a monumental tissue of lies?

Monitor: I’ll let you figure it out.

1001 blogger: Thanks. Big help you are. And seeing poor Harriet Andersson suffer such a prolonged, wretched death. That was painful to watch.

Monitor: If that makes you feel bad, move on to your next movie.

1001 blogger: That would be The Silence. In that one we get to watch Ingrid Thulin suffer a prolonged, wretched death. Jesus, what is wrong with you, sir? There’s more to life than seeing someone writhe in agony!

Monitor: Sorry, you should never watch Cries and Whispers and The Silence back to back. There’s a container of Zoloft over on the doctor’s desk. I think you might need it.

1001 blogger: Thanks. The last film from my inventory was Fanny and Alexander. I felt like crying. Don’t know if it was because of the beauty of images of the film or if I realized it was really his cinematic farewell or if I was just sad to be finished with the Bergman movies on my list.

Monitor: You are too kind.

1001 blogger: (After a few seconds of contemplation) I know you won’t say whether you’re Bergman or not, but just in case I have a couple of questions for you.

1001 blogger: What the hell was Persona supposed to be about?

Monitor: There is much speculation there. If I were Mr. Bergman, and I’m not saying I am, I would say that I contributed to this speculation in the artistic creation of it. I wouldn’t dream of answering your question and ruining anyone’s hypothesis.

1001 blogger: I figured your answer would be something like that. One more question. What was the deal with casting David Carradine in The Serpent’s Egg?

Monitor: (Laughing) So shoot me. I admit to being a bit of a closet Kung Fu fan.

Monitor: How do you feel?

1001 blogger: Shaken. But I’ll persevere. I know you say you aren’t necessarily Bergman. But if you were, I’d just like to say… What is it I’d like to say? I guess, just…I just want to thank you…for everything. 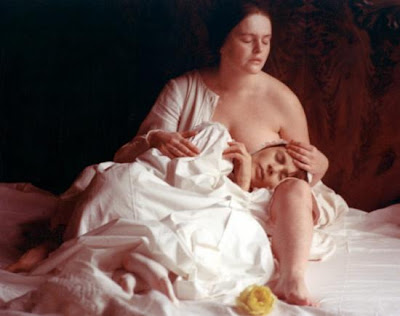 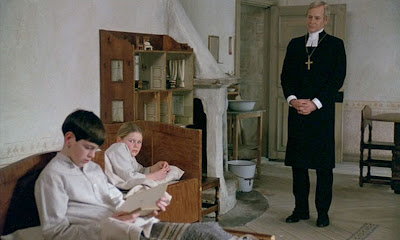