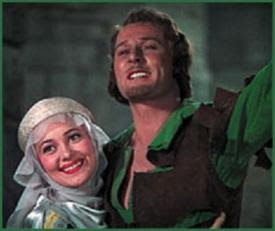 The Adventures of Robin Hood (1938)
Expectations: I honestly don’t remember if I ever saw this film before, but if I did I was probably about 10. Yes, it was back in the day when local television stations showed quality old movies instead of endless reruns of Full House or just showed that Goldie Hawn movie Overboard over and over and over. Ahem.
Anyway, I was hoping to enjoy this early color adventure.

After Viewing: I wasn’t disappointed. I enjoyed it much more than the later version of Robin Hood with Kevin Costner. The Adventures of Robin Hood has everything you might want in an action film from that era, though Robin being able to evade death from multiple adversaries does stretch the ole suspension of disbelief a little. But hey, it’s not supposed to be The Killing Fields! He’s escaping the Sheriff of Nottingham, not the Khymer Rogue! I’m also guessing not many actors could have gotten away with wearing Robin Hood’s green or should I say BRIGHT green outfit, blazing across the screen in techincolor without looking silly. But Errol Flynn manages to do it quite nicely.

And the Elisha Cook Jr. supporting player award goes to…Alan Hale. There’s a slew of candidates here: the opportunistic scene stealing villain Claude Rains, the suave, but villainous Basil Rathbone, or maybe you prefer an oafish villain like Melville Cooper's Sheriff of Nottingham. How about the always reliable Eugene Pallette as Friar Tuck? No, I’m giving it to Little John, Alan Hale. Why? Because of his over 200 screen credits from the teens to 1950, always lending able support to the star, often times Errol Flynn? That’s a good reason, but no. I’m giving it to Alan because if you ever see Alan on a movie on your TV, even a film buff can’t help himself but to shout out, “Hey, it’s the Skipper from Gilligan’s Island’s dad!” I think he deserves a little better than that.
Posted by 1001: A Film Odyssey is produced, directed and written by Chris, a librarian. at 1:35 PM