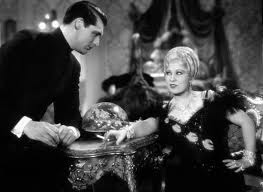 I’ve seen a number of the classic Hollywood movies of the 1930’s. But going over some of the titles in 1001 Movies You Must See Before You Die book, I noticed more than a few omissions from my movie viewing resume. For two weeks, I’m going to try to fill in some of those gaps as well as re-watch some old favorites. I’ll list my expectations for each film going in and state whether these expectations are reached or not. And I’ll give each film my Elisha Cook Jr. supporting player award strictly for the reason that I think it would be fun to do so.

She Done Him Wrong (1933)
Expectations: Many years ago, I went to a double feature that included Mae West’s final film Sextette. Most film fans, even if they haven’t seen a Mae West movie, know what Mae West sounds like and that most of her lines are full of double entendre. Sextette was filmed when Ms. West was well into her eighties and I'm afraid the double entendres just weren’t what they once were. I remember the scene where she is on her honeymoon with a pre-James Bond Timothy Dalton and she says something to the effect of “I can’t wait to say the British are coming, the British are coming.” I can still remember the audience groaning. The second half of this double feature was Myra Breckinridge, properly regarded as one of the worst films of all-time. West was only in her late seventies during this one. Mae says to a tall young man- “Your’e a tall one!” He replies, “Yes, I’m six feet, seven inches.” Mae says something to the effect of “Oh, its not the six feet I’m interested in, it’s the seven inches.” I remember the audience groaning for that one too. Looking forward to checking out one of her films where she is at least somewhere in the vicinity of her prime.

After viewing: The plot of She Done Him Wrong has something to do with a guy getting sent up the river, but he was framed see! He’s got to get out to see his girl (Mae West). She’s two timing him of course and this Russian is interested in her too and the saloon owner is trying to keep the law off his back and they’re watching for an undercover copper called the Hawk and…never mind-the plot really isn’t important here. This is a Mae West vehicle and is really just an excuse for her to change costumes, flirt with every breathing male and give us some one-liners as only she can:

Lady: Ah, lady Lou. You’re a fine gal, a fine woman.
Mae: One of the finest women ever walked the streets.

Suitor: I’ve heard so much about you
Mae: Yeah, but you can’t prove it.

Mae: I wasn’t always rich. There were times I didn’t know where my next husband was coming from.

Mae: Why don’t you come us some time, see me.

And the Elisha Cook Jr. supporting player award goes to…Cary Grant. Silver screen icon Cary Grant in a supporting role? Well let’s face it, in a Mae West picture, everyone else in it is strictly a second banana (Insert Mae West one-liner here). And, it is one of Grant’s earliest roles and he is frankly kind of stiff (Insert Mae West one-liner here, too).
Posted by 1001: A Film Odyssey is produced, directed and written by Chris, a librarian. at 1:36 PM