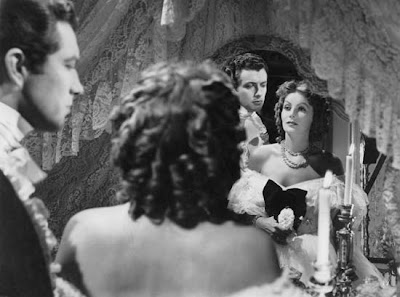 Camille (1936)
Expectations: I knew this was a Greta Garbo picture. Considering, her iconic status, I was looking forward to seeing this for her.

After viewing: I know it was based on a Alexandre Dumas nils play, so it does have a somewhat literary lineage. But my honest opinion while I was viewing is that this was a romance novel come to life: A courtesan in 1847 gay-paree. A young suitor falls in love with her. She won’t go with him because of his lack of money. The man’s father tries to talk her out of marrying him because it would ruin his future. She is in love with him now and is torn. A rich baron wants to marry her and take her to Russia. Of course she doesn’t love the baron, but there are those creditors, you know. Oh yeah, and it’s clear very early on that her ongoing illness is not going to allow her to live a long life anyway.

And Garbo? The only previous movie I’ve seen with Garbo was Grand Hotel, which was an all-star cast extravaganza if memory serves. Camille is purely Garbo’s vehicle. She is certainly glamorous and exotic and if seeing Ms. Garbo in various costumes is your thing, welcome to Camille. It took me a while to get used to her accent, but I did and can see why she’s such revered figure. Of course, part of this status was because she quit the movies while still in her prime (She never made unfortunate comeback pictures like Mae West, see She Done Him Wrong entry from 5/22) and became a famous recluse. Her suitor, Robert Taylor, seems the perfect romance novel lover, but you never forget the star of this movie has the initials G. G.

And the Elisha Cook Jr. supporting player award goes to…Laura Hope Crews. Most famous for being Pittypat in Gone With the Wind. A film like Camille, with such earnest lovers needs some comic relief, and Crews as Prudence is always the one with the cutting line or made to appear foolish herself or says the wrong thing. My favorite line of hers is when she tries to convince some of her dinner guests that she’s 36. (It’s how she says it. Trust me it’s funny)
Posted by 1001: A Film Odyssey is produced, directed and written by Chris, a librarian. at 1:31 PM