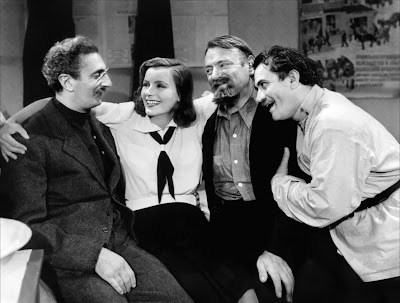 After viewing: After seeing the more serious filmCamille, I had no idea Garbo could be so funny! (And I'm guessing her Ninotchka character was the later inspiration for the character of Natasha in Rocky & Bullwinkle). Also, after a recent viewing of Captains Courageous, I had no idea that Melvyn Douglas could be so funny, either! The screenplay for Ninotchka is truly witty (especially the first half). A cold war romance before the Cold War even began. Overall, a very pleasant surprise.

And the Elisha Cook Jr. supporting player award goes to…(a six way-tie)Actually two trios. First, the great supporting Russian representatives in Paris, who begin to like certain aspects of capitalism more than they should. They are played with great charm and humor by Sig Rumann, Felix Bressart and Alexander Granach. During their scenes with Garbo, they are kind of like the Four Marx Brothers. (With Garbo being a much sexier version of Zeppo if you want to take the comparison further than it needs to go).

The other trio is screenwriters Billy Wilder, Charles Brackett and Walter Reisch, whose sharp screenplay and political quips seemed years ahead of its time.
Supporting player oddity: The fourth billed Bela Lugosi (billed ahead of Rumann, Bressart and Granach) has only one scene that lasts about two minutes, and he really isn’t that memorable in it.* I guess that’s show biz.

*For a more memorable Lugosi supporting performance, see him as Ygor in Son of Frankenstein.
Posted by 1001: A Film Odyssey is produced, directed and written by Chris, a librarian. at 1:29 PM