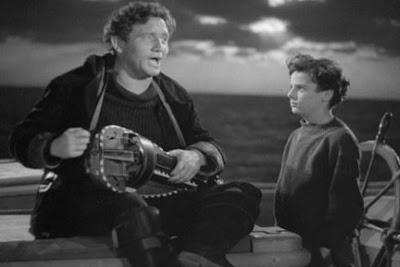 Captains Courageous (1938)
Expectations: I knew Spencer Tracy won an Oscar for this as the Portuguese fisherman and it was based on a Rudyard Kipling story.

After Viewing: A sometimes corny, sometimes inspiring story of a spoiled rich kid who grows up after being lost at sea and rides around with a fishing vessel for several weeks. It’s interesting that the boy, played by Freddie Bartholomew, has a lot more screen time than Tracy, the Oscar-winning star. I thought Tracy came close to losing his Portuguese accent whenever he got mad (but I’ll give him the benefit of the doubt, it’s Spencer Tracy, perhaps the most revered American screen actor of the twentieth century, after all!) I liked the movie overall, though the plot is not exactly chock full of surprises. And another thing class-if you want a movie with literary examples of foreshadowing, this movie might be a good place to start.

And the Elisha Cook Jr. supporting player award goes to…Lionel Barrymore. Some good candidates here, including the always interesting John Carradine and the Wizard of Oz’sUncle Henry, Charlie Grapwine. Lionel Barrymore may be known chiefly to modern audiences as the evil Mr. Potter from It’s a Wonderful Life, but here he plays a the wily, but sympathetic ship’s captain. I just saw him in Camille as Robert Taylor’s father, and I’m sure he’ll pop up again on my DVD player soon.
Posted by 1001: A Film Odyssey is produced, directed and written by Chris, a librarian. at 12:34 PM