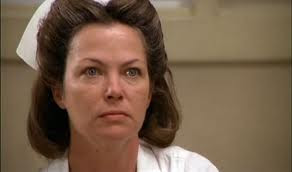 My God. I’m in a straight jacket. I’ve got to remember what I’m doing here.
Kind of blurry. Coming into focus now. There’s the doctor. Doctor…Ratched. And there’s the other doctor. The big Indian, Dr. Bromden. Wait. Except he wasn’t always a doctor. He was a patient! And Doctor Ratchett. I thought she was a nurse! They’ve been in front of me before, but they were different people weren’t they?

“I see you are awake now. And much calmer I hope. I’m sorry you had to be sedated and restrained,” Doctor Ratched gave me a malevolent smile as she turned towards her colleague.

“Dr. Bromden,” she asked her colleague. “Do you think we need the restraints on this patient any longer?”

Bromden shook his head before walking over to me and unbuckling my straight jacket. He offered me a stick of Juicy Fruit. I declined. Seemingly perturbed, he stuck the piece in his own mouth and began chewing with gusto.

I don’t know why she called me a librarian. I was a reporter. That’s right. I’m undercover in this place. I’m here to find out who killed Sloan! I can’t let her find out why I’m here or I’ll be finished.

“Now, Mr. Librarian,” she repeated. What’s all this you were going on about earlier about trying to find the real murderer of someone named Sloan?”

I guess I was too late. I must have sang like a canary while they had me under.

“We have no records of anyone here named Sloan, do we Doctor Bromden?”

The big Indian shrugged, indicating agreement with her assessment.

“Let me clarify things for you. You were put in this hospital because you were in front of a movie theater ranting about why the movie going public spent ninety million dollars last week for a Pirates of the Caribbean movie and you seemed outraged that they weren’t more discriminating in how they spent their money. You were going on and on…it was a real scene. You created quite a ruckus.”

I wiped my now free hand against my forehead. I didn’t do any of what she just described. I admit to having had these thoughts, but they were internal. How could she have known? What kind of mind games were they playing in this place? I tried to respond, but I still couldn’t find my voice. Why couldn’t I speak? Why now?

Doctor Ratched winced as if irritated by my inability to speak.

“Cat still got you tongue? Your record shows you have been in therapy over the last few months for, what was it again? What does the record show Doctor Bromden?”

The big Indian handed her my file.

“You were going through therapy while watching Ingmar Bergman movies and they concluded you were eventually going to have a breakdown. Well, It seems like you had one all right.”

She was lying. Those psychiatrists I had been seeing gave me a clean bill of health. I wasn’t sick! This was a cover-up! This was some kind of conspiracy!

The doctor pulled up a chair next to me and began whispering in my ear.

“We can help you. But you’ve got to cooperate. This whole business about someone named Sloan is just a fabrication that generated from you psychosis. Isn’t it?”

I looked at her defiantly and shook my head. She backed away and looked at me with disdain. Yet there was a noticeable gleam in her eye as she began to speak again.

“We may need to administer stronger measures to make you see the light. Or should I should say to make you well again.”

Doctor Bromden picked up a pillow and began lumbering in my direction.

“No, Doctor Bromden. I didn’t mean that. Have a seat while I finish.”

The big Indian did as she said but not before throwing the pillow down and huffing disapproval.

“As I was saying,” she continued. “You see that door to the side of us? Do you know what happens through that door?”

I looked at her and tried to mouth the word lobotomy. I still hadn’t gotten my voice but she was able to read my lips. She threw back her head and laughed.

“Oh, please. Lobotomy? Are you serious? And I’m not talking about shock treatment or solitary confinement either. What I’m talking about, my friendly librarian is…is…Nymphomaniacs!

“Nymphos!” I said finally getting my voice at last.

“Well, so you can talk.” Doctor Ratched replied.

She moved closer to me again and began to whisper in that voice that sounded like fingernails being scrapped down a chalkboard.

“And not just any nymphos,” she continued. “Young, fertile nymphos who haven’t had a man in a long time. They’d just love to get their hands on a friendly...neighborhood...librarian. There’s no telling what they’d do to you.”

“You think I’m afraid of your torture chamber?" I said. "You don’t think I know about Sloan?”

I rose with the intention of putting my hands around her neck and squeezing the life out of her but a moment of revelation stopped me.

Before I could continue, Dr. Bromden grabbed me from behind and lifted me off my feet. He slung me towards the door. I slammed into it headfirst and plummeted through to the other side. I scrambled back up to get the hell out of there, but the doctors had locked already locked me in.

I turned around and there they were.

Nymphos. Maybe a dozen or more.

They began to form a circle around me. They looked familiar. I recognized them alright. They all looked like Olivia deHavilland! They began singing. One Olivia sang I Like Coffee, I Like Tea. Another Olivia, it must have been the Gone With the Wind Olivia, began to whistle Dixie,another Olivia sang My Bonnie in a Scottish brogue, and yet another sang Sweet Georgia Brown as she began to dance the Charleston. They converged on me. As they neared me, they began to make humming-bee-like sounds. They pushed me to the ground and began to paw at me…I managed to get away for a moment and struggled to get to a wall. There was no other door. It was most strange. The Olivias were all going to be back on me soon, yet it was like they were all looking at me from far away. This room, this Ward 12, this Nympho room was like a deep hole and I was being watched from above. I felt like Indiana Jones and I was in a…a… snakepit…The Olivas were coming back to me. I couldn’t maintain consciousness…I…I…Will this nightmare ever end? I must…sleep…Can’t stay awake…

My God. I’m in a straight jacket. I’ve got to remember what I’m doing here.
Kind of blurry. Coming into focus now. There’s the doctor. Doctor…McMurphy. And there’s the other doctor. The little Italian, Dr. Martini. Wait. Except he wasn’t always a doctor. He was a patient. And Doctor McMurphy. I thought he was a patient, too! They’ve been in front of me before, but they were different people weren’t they? 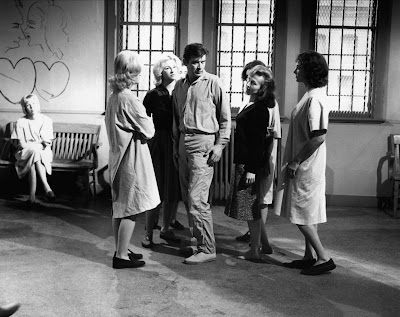 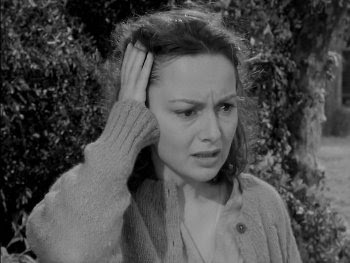 Posted by 1001: A Film Odyssey is produced, directed and written by Chris, a librarian. at 1:16 PM