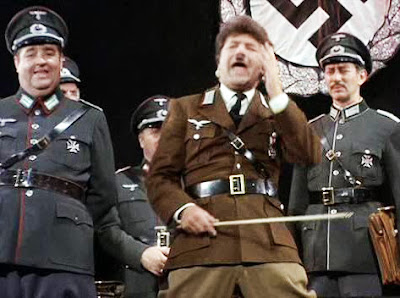 I thought it was odd when I first heard they were making a Broadway musical adaptation of my favorite Mel Brooks movie, The Producers. * But let me tell you, it’s going to be a hit! **

You will not see the hippie Hitler (played by Dick Shawn*** in the original) in the musical remake. I guess Mel thought the character was too dated. Of course, he’s my favorite character in the original and I kept waiting for him to come on stage in the updated version…but, alas, it was not to be. ****


*My favorite after Young Frankenstein, Blazing Saddles, High Anxiety and Spaceballs. Well, The Producers is probably tied with Spaceballs.

**I know, it’s already been a hit for years. Let me at least pretend its opening night, Okay?

****Having the gay director play Hitler in the new version was still pretty funny.

*****And not to be confused with the 80’s band called The Producers, who did a couple of songs I like including She, Sheila. I think I’m getting off topic.

******Yet over the years, I admit to singing Springtime for Hitler to myself more than a few times.

*******Is original even the proper term? The Broadway show isn’t a remake. It’s a musical adaptation. My Fair Lady isn’t a remake of Pygamalion exactly. Is it?