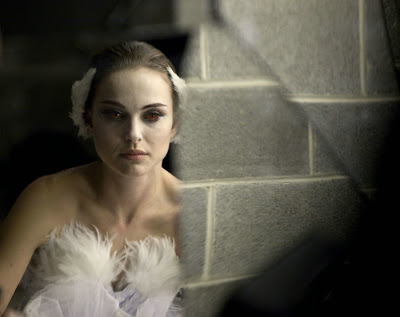 Since I imagine The Black Swan will be in the latest edition of The 1001 Movies You Must See Before You Die book and I watched it this week, I feel pretty safe in adding it here. However, I’m not sure what to say about this film, so I’ll just ask some friends and family who have seen it what they think and follow with my comments about their comments.

My niece: It was really strange. Not what I had in mind. Some of those images were just creepy, creepy, creepy…But I liked it. (I'm glad you seemed to have learned that creepy isn’t necessarily a bad thing. It’s an important life lesson.)

My other niece: I thought it was the coolest move ever! But I could have done without the scene with the old man playing with himself on the subway. (I too will have nightmares about that one.)

My son: Didn’t really care for it. I prefer anime. (We’ll watch Metropolis or My Neighbor Totoro next, I promise)

An online friend: I must be getting old. I can remember when Barbara Hershey was such a cutie! Now she’s playing parts like this as if she were doing an imitation of the mother in Carrie! (I asked him what he thought of the movie overall, and he said he found it very creative, but didn’t like the scene with the old man on the subway. Note: Since it seems to be a consensus, I would ask Darren Aronofsky for his next film to omit all scenes with old men diddling with themselves.)

Movie buff friend at work: Aronofsky goes from a film about the psyche of washed-up professional wrestler in The Wrestler to an up and coming ballet star in The Black Swan with only mixed results. (I asked him to embellish and he would not.)

My best friend: Not really mind kind of flick, Sam. My old lady just insisted on watching, and seeing as it was her birthday and all, I agreed. So much dancing. So boring. But then comes the scene with the two women. You know, he, he he. When they venture to the island of lesbos? Now that’s my kind of movie! Don’t quote me on that. My old lady gets jealous, you know. (My best friend calls everyone Sam. His wife actually left him months ago, so his comments about his “old lady” concern me greatly.)

My wife: Why do you keep talking about The Black Swan? I think you’re just obsessed with Natalie Portman. Maybe you should just off and marry Natalie Portman! But when you do, don’t forget to give her this…(My wife then broke a bottle of Michelob over my head and stuck the jagged edge of it solidly into my gut. Despite the pain, I have to admit it took me to a level of artistic consciousness that I have never attained before.)
Posted by 1001: A Film Odyssey is produced, directed and written by Chris, a librarian. at 10:26 AM