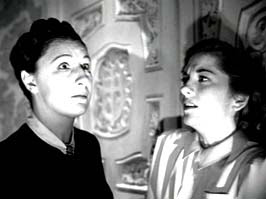 Rebecca (1940):
Expectations: Always look forward to viewing a Hitchcock film. Knew this was his only Best Picture winner. Laurence Olivier is usually worth seeing (Unless it’s in something like Harold Robbins’ The Betsy or The Jazz Singer). I knew it was also based on the famous novel of the same name.

After viewing: I had forgotten (or maybe I never realized) this was David O Selznick’s follow up to Gone With the Wind. It appears (and is confirmed by the accompanying commentary track) to be part Hitchcock style and part O. Selznick epic. This competing combination seems to works for the most part.

I honestly don’t recall seeing a movie with Joan Fontaine before, but she is quite fetching and well cast here. Another interesting supporting role is George Sanders as Olivier’s oily voiced rival. However, any fan of Rebecca will probably tell you the showcase role is that of the macabre Mrs. Danvers and Judith Anderson plays it to the hilt.

The overall plot does have some holes in it (As Hitchcock himself points out-Where did the second body come from?) but it isn’t hard to see why Rebecca (The book and the film) has had an enduring appeal.

And the Elisha Cook Jr. supporting player award goes to…Judith Anderson, of course. Though I admit it is tempting to throw a bone to Jasper the loyal cocker spaniel.
Posted by 1001: A Film Odyssey is produced, directed and written by Chris, a librarian. at 2:59 PM