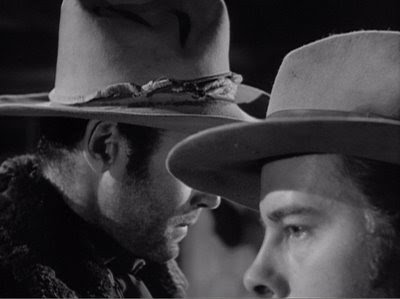 The Ox-Bow Incident (1943)
Expectations: I remember back in the days of Poli Sci at good ole watching this film along with a film about the Leo Frank/Mary Phagan criminal case. Both are good examples of mob justice reaching the wrong conclusion.

DVD commentator discrepancy: Two commentators on this DVD. One, William Wellman Jr., discusses how rare it is that his father would change any original material when he adapted a book for a film. The other commentator then gives us several examples, including two characters that were morphed into one, of how the senior Wellman did just that.

And the Elisha Cook Jr. supporting player award goes to…Harry (Henry) Morgan. One of movies and TV’s greatest sidekicks. I’m guessing this was one of his earliest roles as Henry Fonda’s, uh, for lack of a better word…sidekick.
Posted by 1001: A Film Odyssey is produced, directed and written by Chris, a librarian. at 11:12 AM