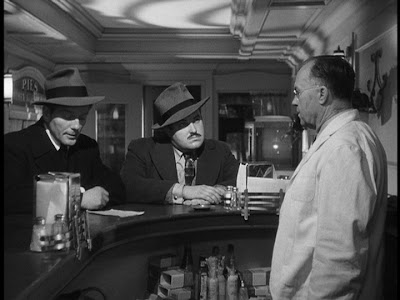 The Killers (1946)
Expectations: Knew it was a well thought of film noir with Burt Lancaster.

After Viewing: “Ernest Hemingway’s The Killers” has very little to do with the Hemingway story past the first couple of scenes. Lancaster's character "The Swede" is killed in the first few minutes of the film and the story is told in flashback through the eyes of an insurance investigator researching a claim (a little far-fetched in the extreme it goes to, I admit). The flashback aspect makes me think of this as kind of a film-noir Citizen Kane, well not quite, but I do really like the story-telling technique. And you got to like Lancaster’s evil cabal of crooks for their big heist(Albert Dekker, Jeff Corey and Jack “why wasn’t he a bigger star?” Lambert). And let’s not forget the gorgeous femme fatale (Ava Gardner). There are other plot holes if you really think about it. Why do the killers announce in the opening scene they are there to kill their vicitm and risk someone stopping them or their prey getting away? Why don’t they just play it cool until they find him? * I think the answer is that it makes for a great opening scene that sets the mood for the whole piece.

One reason to watch Don Siegel’s 1964 version of The Killers (other than Lee “my favorite action movie actor of all time** Marvin) is Ronald Reagan.

If you don’t like Reagan, you get to see him play a bad guy that slaps Angie Dickinson to the ground and gets punched out by John Cassavettes.

If you do like Reagan, he slaps Angie to the ground and gets punched out most convincingly.

*This was the question that the director of the 1964 Killers, Don Siegel asked. He didn’t use this scene at all in his version.

**Actually tied with Steve McQueen on my imaginary list. Or maybe Clint Eastwood? But let’s not forget Kirk Douglas…Forget it-this is why my list is imaginary.


And the Elisha Cook Jr. supporting player award goes to...William Conrad. (And I’m talking about the 1946 version here.) Despite the fine supporting players that I mentioned above, I want to single out Conrad here. During this time period the short, stout, balding actor mostly played thugs or hired guns (like he does in The Killers). Who would have thought that this same short, stout, balding actor would become a TV star twenty-five years later as a detective in Cannon and later in Jake and the Fatman? What are the odds that someone with this type of resume and physical appearance would get his own show today? Answer: No chance. Here’s to you, Mr. Conrad. We need more like you and less pretty boys. (Stepping down off my soapbox.)
Posted by 1001: A Film Odyssey is produced, directed and written by Chris, a librarian. at 4:09 PM